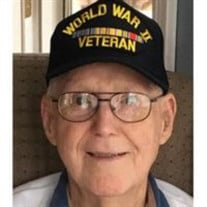 William P. Hughes of Belmar, NJ, formerly of North Huntingdon died Tuesday, April 14, 2020 at Sunnyside Manor, Wall, NJ. He was born on July 21, 1924 in Osceola Mills, PA, a son of the late Martin and Mary (Hefferan) Hughes. He was predeceased by his wife of 67 years, Lucille S. Hughes; a daughter, Jacalyn; and nine brothers and sisters. Formerly of North Huntingdon, PA, he worked for many years at Westinghouse Research Lab and was a member of Immaculate Conception Church, Irwin, PA. He was a volunteer at both Jeannette Hospital and Norwin Area Meals on Wheels. A World War II US Army veteran, wounded in the Battle of the Bulge, he was awarded the Legion of Honor in 2013 in recognition of his service in France. He is survived by his children, Drs. Patricia and John Hutchinson of Belmar, Susan and Paul Mead of Weddington, NC, and Terry and Maria Hughes of Verona, PA; grandchildren Ben and Alison Mead, Abby Mead, Jill and Billy McFarland, Jennifer and Russ Wirsing and Laura and Allen Graham; and great-grandchildren Adelle Wirsing, Elyse, Lydia and Luke Mead, and Skylar and Addison Graham. A memorial event will be scheduled at a future time. In lieu of flowers, a contribution may be made to the Westmoreland County Food Bank, 100 Devonshire Drive, Delmont, PA 15626 or Brother’s Brother Foundation, 1200 Galveston Avenue, Pittsburgh, PA 15233.

The family of William P. Hughes created this Life Tributes page to make it easy to share your memories.

Send flowers to the Hughes family.