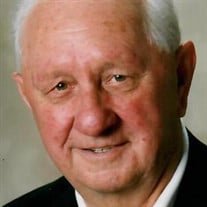 William R. Goras, 85, of North Huntingdon, passed away peacefully at home on Tuesday October 4, 2016. He was born February 3, 1931 in Westmoreland City, a son of the late John and Christine (Martincheck) Goras. In addition to his parents he is preceded in death by a daughter Sandra Lee Goras and a son Michael J. Goras; siblings John, Delores, Paul, and George Goras, Julia Neligh, Mary Pecorraro, Betty Hazlett, Irene Heller, Nancy Miller, Rose Miller, Eleanor Sames and Ethel Misner. Bill graduated from Irwin High School. He was retired from the U.S. Postal Service where he worked as a postal carrier for 27 years, and also worked for Laidlaw Transportation as a bus driver for 14 years. Bill was a member of Holy Trinity Lutheran Church, Irwin, and was an U.S. Army Airborne veteran that served during the Korean War. He enjoyed dog races at Wheeling Downs, bowling, and was a former little league coach. He is survived by his wife of over 63 years Lillian (Randolph) Goras; children William R. Jr. (Cindy) Goras of Jeannette and Tammie (Keith) Gribschaw of Penn Township; 6 grandchildren; 8 great grandchildren; brother Ronald (Veronica) Goras of Brunswick, Ohio; and sisters Ann Harbaugh of Greensburg and Judy Kalina of Cleveland, Ohio. Friends and family will be received from 2 to 4 and 6 to 8 p.m. Friday at the William Snyder Funeral Home Inc., 521 Main Street, Irwin, 724-863-1200 where a funeral service will be held at 11:00 a.m. Saturday with Reverend Clifton J. Suehr officiating. Interment will follow at Penn Lincoln Memorial Park. The family would like to extend appreciation to the V.A., Community Care, Briar Cliff, Hempfield Manor, and Medi Home Hospice for the care that they have received. For online condolences please visit www.snyderfuneralservices.com.

William R. Goras, 85, of North Huntingdon, passed away peacefully at home on Tuesday October 4, 2016. He was born February 3, 1931 in Westmoreland City, a son of the late John and Christine (Martincheck) Goras. In addition to his parents he... View Obituary & Service Information

The family of William R. Goras created this Life Tributes page to make it easy to share your memories.

Send flowers to the Goras family.