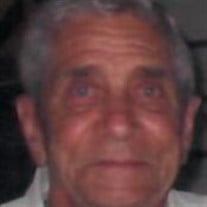 Vincent J. Villi, 91, of Irwin, died at home Friday January 22, 2016. He was born August 12, 1924 in Wilkinsburg, a son of the late Dominic James and Mary Teresa (Arena) Villi and was also preceded in death by his wife Dolores E. (Willett) Villi, brothers, sisters, and a grandson. He retired as the owner of the Odds and Ends Shoppe, Irwin. He started his working career as a manager for Holland Furnace Co., Buffalo, NY, then returned to the area as a partner of Parkway Furnace & Supply, Glassport, and then owned and operated Sam’s Auto Sales of McKeesport. He was an Army veteran of World War II and was one of the last survivors in Westmoreland County of the Battle of the Bulge. He is survived by his children, Vincent D. (Gina) Villi of Penn Township, Patricia M. (Walter) Privett of Vero Beach, FL, Michael J. (Denise) Villi of Greensburg, Robert E. Villi of Irwin, Theresa (Tom) Bielek of Wilkins Township, Jeffrey A. (Nancy) Villi of North Huntingdon, Debbie Squires of Irwin, and extended family Arthur B. (Debbie) Trezise and family of Spring Hill, FL; eleven grandchildren; twenty great grandchildren; siblings, Rose Bilotti of Philadelphia, Frank Villi of Buena Vista, Katherine Kotvas of Verona, and Joseph Villi of Boston; also nieces and nephews. He was a special person to his family and friends and will be greatly missed by everyone. Friends will be received from 2 to 4 and 6 to 8 p.m. Monday at the William Snyder Funeral Home Inc., 521 Main Street, Irwin, 724-863-1200. Parting prayers will be held at 10:30 a.m. Tuesday in the funeral home followed by a Mass of Christian Burial celebrated at 11 a.m. in the Church of the Immaculate Conception, Irwin. Military honors will be performed outside the church following the Mass. In lieu of flowers a contribution can be made to Excela Home Health Care Hospice, 134 Industrial Park Rd., Greensburg, PA 15601. For online condolences please visit www.snyderfuneralservices.com.

Vincent J. Villi, 91, of Irwin, died at home Friday January 22, 2016. He was born August 12, 1924 in Wilkinsburg, a son of the late Dominic James and Mary Teresa (Arena) Villi and was also preceded in death by his wife Dolores E. (Willett)... View Obituary & Service Information

The family of Vincent J. Villi created this Life Tributes page to make it easy to share your memories.

Send flowers to the Villi family.