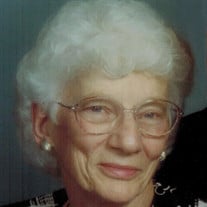 Verne LaRue Schlosser 91, of North Huntingdon was called to be with the Lord March 25, 2020. Born April 4, 1928 in Ferndale, Johnstown, she was a daughter of the late Clifford "Tip" and Elizabeth (Miller) Thomas and was also preceded in death by her husband Donald G. Schlosser; sisters Leona (the late Lee) Bennett, Evelyn Thomas, and Ethel Gene (the late Thomas) Parkinson. She is survived by her loving children James Schlosser, Nancy (Gilbert) Selia; grandchildren Timothy and Kaitlyn Selia; also nieces, nephews and many friends. She enjoyed providing for her family and keeping a clean home. In the numerous moves the family made she kept God ever in the picture finding a new church and keeping all of the family engaged in church activities. Along those lines, she was a Sunday school teacher, and later, as a member of the First Presbyterian Church of Irwin, she was an Elder and served on the Fellowship Committee, Woman's Circle, Meals on Wheels, the Cradle Roll, and the Trinity Village Association. She was a proud graduate of Ferndale High School. She held jobs working for a district attorney, the American Red Cross, and an import/export company. In her last job prior to retiring she worked at the Westmoreland County Welfare Office where she found a way to serve many needing assistance to get back on their feet. Verne loved cats. After meeting her beloved husband Don, she came to better know and love dogs as well. She enjoyed any games with the family along with playing pinochle with her husband and parents and solitaire with cards and later on computer. She enjoyed watching college and pro football and baseball as well as the basketball games during March madness. We take solace in that she is reunited with her husband and parents along with her relatives and friends that have gone on before. There will be a private viewing and funeral service for the immediate family. Verne will be laid to rest next to her husband at Union Cemetery. A memorial service will be held at a future date. The William Snyder Funeral Home, Irwin, is in charge of arrangements. For online condolences please visit www.snyderfuneralservices.com.

Verne LaRue Schlosser 91, of North Huntingdon was called to be with the Lord March 25, 2020. Born April 4, 1928 in Ferndale, Johnstown, she was a daughter of the late Clifford "Tip" and Elizabeth (Miller) Thomas and was also preceded in death... View Obituary & Service Information

The family of Verne LaRue Schlosser created this Life Tributes page to make it easy to share your memories.

Verne LaRue Schlosser 91, of North Huntingdon was called to be...

Send flowers to the Schlosser family.