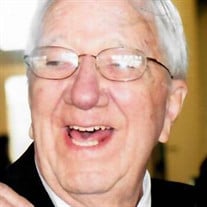 Thomas Allen Magill, of Harrison City, died peacefully and went to be with the Lord on Wednesday, March 22, 2017 at UPMC East in Monroeville. He was born in Greensburg, a son of the late David S. Magill and Emma (McIntyre) Magill. In addition to his parents, he is preceded in death by his first wife M. Louise Magill; and his brother Paul Magill. He is survived by his wife Judy (Kamel) Magill; sons Douglas S. (Lauren) Magill of Chatham, New Jersey and Scott Magill of Maricopa, Arizona; stepdaughters Tamy Anne Kamel of North Huntingdon and Teya Christine Kamel of Pittsburgh; grandchildren Brandon Magill of New York City, New York, Tyler Magill of Chatham, New Jersey, Zane and Scott Magill of Queen Creek, Arizona, and Lotus Soletti of Pittsburgh; brother David (Lorella) Magill of North Huntingdon; sister-in-law Marion Magill of North Huntingdon, brother-in-law Dennis (Debbie) Rutan of Penn; numerous nieces and nephews; and his grand-dog Honey. He was a member of the Community United Methodist Church in Harrison City. Tom was a veteran of the Korean War and retired as an Officer of Lincoln Coach Lines. He was an avid golfer during his years living in Scottsdale Arizona, and was a loyal Pittsburgh Steelers season ticket holder for many decades. He never missed a Steeler game on TV when he was living in Arizona and in later years when he was unable to attend home games. He was the “go to” person for facts about the Civil War, World War II and Native American History. He especially enjoyed reading Louis L’Amour books, watching any and all Western movies and playing board games with is family. The family wishes to thank friends and neighbors for their prayers, Love and support and special friends Scott McWalter, Jon Aigner, Bonny Alonzo and Jackie S. Enec. Friends and family will be received from 2 to 4 and 6 to 8 p.m. Friday at the William Snyder Funeral Home, Inc., 521 Main Street, Irwin, 724-863-1200, where everyone will gather for a funeral service at 11 a.m. Saturday with Pastor Jim Decker officiating. Interment will follow at Union Cemetery in Irwin. Memorial contributions can be made to the Community United Methodist Church Building Fund, 3487 Route 130, Irwin, PA 15642. For online condolences please visit www.snyderfuneralservices.com.

Thomas Allen Magill, of Harrison City, died peacefully and went to be with the Lord on Wednesday, March 22, 2017 at UPMC East in Monroeville. He was born in Greensburg, a son of the late David S. Magill and Emma (McIntyre) Magill. In addition... View Obituary & Service Information

The family of Thomas Allen Magill created this Life Tributes page to make it easy to share your memories.

Send flowers to the Magill family.