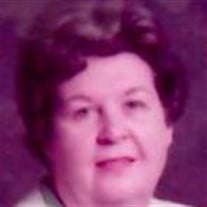 Thelma Lucille “Lou” (Solberg) Carlson Kifer, 93, of a resident of Redstone Highlands, Greensburg, formerly of North Huntingdon, died Saturday June 3, 2017. She was born April 18, 1924 in Jeannette, a daughter of the late George N. and Marie Olson Solberg. She was a graduate of Greensburg High School, Class of 1941. During her long and fruitful life she worked as a secretary and office coordinator for firms such as Elliott Company of Jeannette, The Standard Observer, and Kifer & Son. She was a member of Immanuel Lutheran Church, Irwin and a former member of Holy Trinity Lutheran Church, Jeannette, where she was a member of the ladies church circle, a longtime Sunday school teacher, and former choir member. Lou was an avid bowler, golfer, and card player and participated in bowling and golf leagues, bridge clubs, and canasta club, and was a member of the Elliott Company Ladies Retirees Group. She enjoyed gardening and oil painting and was fond of travel. In addition to her parents she is preceded in death by her husbands Charles L. Carlson and Harold C. Kifer Jr.; her son Larry Charles Carlson; and sisters Verna Louise Solberg, Ruth Bastin, and Shirley Ann Welty . She is survived by her children Charlene M. Sarver of Pitcairn and Ronald D. Carlson of Richmond, VA; daughter-in-law Rhoma Carlson of North Huntingdon; sisters, Joanne (Gerald) Strasser of Summerfield, NC, and Linda Nuzum of Oviedo, FL; five step daughters; numerous grandchildren, step grandchildren, great grandchildren and step great grandchildren; and nieces and nephews. Friends will be received from 6 to 8 p.m. Tuesday at the William Snyder Funeral Home Inc., 521 Main Street, Irwin, 724-863-1200, where a funeral service will be held at 10:30 a.m. Wednesday. Interment will follow in Westmoreland County Memorial Park. In lieu of flowers a contribution can be made to Susan G. Komen Breast Cancer or Alzheimer’s Research. For online condolences please visit www.snyderfuneralservices.com.

The family of Thelma Lucille Solberg Carlson Kifer created this Life Tributes page to make it easy to share your memories.