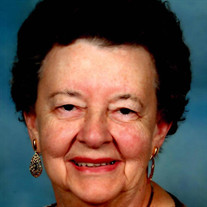 Stefina Bernice Ann (Kozek) Ogrodnik Garcia, of North Versailles, passed away in God’s arms at the age of 95, on June 25, 2019. Steffy was born on February 23rd, 1924, in East Pittsburgh, PA. She was a blessing to her mother, Josephine Kellar Kozek, her father, Anton Kozek, her two sisters, Mary (née Kozek) Novotny and Helen, and her brother Edward. She cherished her childhood with her loving family, and it developed into the most important legacy she would leave behind. Her first marriage to Walter Ogrodnik and second marriage to Joseph Garcia, exemplified love everlasting through family bonds. They made memories in East Pittsburgh, East McKeesport and ultimately, North Versailles, each place having value simply because they were together. Later in life, Steffy moved into the Redstone Highlands community, where she continued to enjoy the company of her family and friends for the remainder of her days. Steffy was a devoted provider, volunteer, family member, and friend. She ran office machines at Westinghouse during WWII, used her pride in her appearance to succeed in women’s fine clothing sales at Winklemans and Prices, and ran carbon machines at Ringsdorff. Steffy attended almost every football, baseball, and basketball game in which her four sons competed. She was a devout member of St. Robert Bellarmine Parish and more recently St. Elizabeth Ann Seton Catholic Parish. She was charitable with her money and time towards anyone that needed her, including working at her Parish’s school cafeteria and running the well-known Pizzafrita stand at the church fair. Some of Steffy’s greatest past times included babysitting her grandchildren, watching her children’s dogs, painting, eating chocolate, and hosting holiday and birthday parties. She was a pillar of support and encouragement, reminding everyone that, “It’s a great life if you don’t weaken,” and “If you can’t say something nice about somebody, don’t say anything at all.” She was always happy and blessed to be an integral part of her family and friends’ lives. Steffy was preceded in death by her parents, sisters, brother, two husbands (all aforementioned), one grandchild, Ashlee Ogrodnik, and dear friend, Ellie Valicenti. Steffy is survived by a large family legacy which includes her five children, fourteen grand-children, and eleven great-grandchildren. Steffy and her first husband, Walter, live on through their son, Ronald (Sherry) Ogrodnik of Canfield, OH, son, Joseph (Joyce) Ogrodnik of Upper St. Clair, PA, son, Walter (Yanira) Ogrodnik of Canonsburg, PA, daughter, Sandra (Dale) McCurdy of Greensburg, PA, and son, Richard (Laura) Ogrodnik of Spring Branch, TX. Overwhelming adoration for their grandmother will be carried through Kristi (Dustin) Swartz, Ryan (Sara) Ogrodnik, McKenzie Ogrodnik, Kevin (Genevieve) Ogrodnik, Corrine (Joseph Vesely) Ogrodnik, Kelly (Kevin Robinson) Ogrodnik, Benjamin (Joanna Reed) Ogrodnik, Carmen (David) Mizer, Marcella Ogrodnik, Justin (Krista) McCurdy, Alesha McCurdy, Brandon Ogrodnik, Amber Ogrodnik, and Ian Ogrodnik. Lasting love is left with her great-grandchildren Brady, Rachel, Lillia, Sienna, Amelia, Elise, Easton, Miller, Walden, Jennings, and Rosie. Wonderful moments are also remembered through her extended family, including her nephews, niece, brother-in-law, and sisters-in-law. She is also survived by her close friend Maria DiBiase. The exceptional staff of Redstone Highlands Memory Care Unit in North Huntingdon, Redstone Highlands Skilled Care Unit in Greensburg, Bridges Hospice, and personal companions, Ashley, Diane, Dori, Julie, Kimmie, Lauren, and Sydney, all played an integral role to ensure Steffy’s life was meaningful. Unsurpassed appreciation goes towards everyone who left an imprint with Steffy during her journey through life just as her love will remain an inimitable imprint within all of us. Family and friends will be received for visitation from 2pm to 6:30pm, on Sunday, June 30th, 2019, in the Forgie-Snyder Funeral Home, 1032 Broadway Ave, East McKeesport, PA 15035. On Monday, July 1st, 2019 will be the funeral mass at 9:30am at St. Elizabeth Ann Seton Catholic Church, 200 Leger Road, Irwin, PA 15642. Interment will follow at St. Joseph Catholic Cemetery in North Versailles, PA. In lieu of flowers, contributions can be made to Stefina Ogrodnik’s Serra Catholic Scholarship Fund, information available upon request. For online condolences please visit www.snyderfuneralservices.com

Stefina Bernice Ann (Kozek) Ogrodnik Garcia, of North Versailles, passed away in God&#8217;s arms at the age of 95, on June 25, 2019. Steffy was born on February 23rd, 1924, in East Pittsburgh, PA. She was a blessing to her mother, Josephine... View Obituary & Service Information

The family of Stefina Bernice Ann Ogrodnik Garcia created this Life Tributes page to make it easy to share your memories.