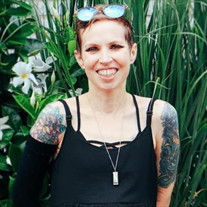 Sophia K. (Yelovich) Holland, age 42, of Irwin, formerly of Orrtanna, passed away Thursday, November 25, 2021. She was born September 4, 1979 in Teaneck, New Jersey, a daughter of V. Rev. Elias and Bonnie Yelovich. She was an Orthodox Christian and a member of her father’s congregation in Emmitsburg, Maryland. Sophia attended Fairfield Area High School and received her High School Diploma from the Pennsylvania Home School Association and went onto attend Slippery Rock University studying Music Therapy. She worked until disabled by her illness at the Creative Adventures Learning Center in North Huntingdon. She also taught piano lessons and played piano at the chapel of the Auberle Center in McKeesport. Sophia was a loving mother, daughter and sister, an angel in the flesh. To know her was to love her. She was a very gifted and talented pianist. She suffered a long illness and was cared for over a period of years by the medical professionals at Magee Woman’s Hospital. She never spoke harshly about anyone, even overlooking all the many acts of unkindness that she endured. Sophia was patient and fought her illness with all her strength. In addition to her parents, she is survived by her children Helena Holland, Joseph Holland and Jonathan Holland; and sisters Irene (Bradford) Yelovich Senning of Pittsburgh, Dr. Helena (Paul) Yelovich-Bland of New York City , Alexandra (Yelovich) Gangeware of Orrtanna and Xenia Yelovich of Irwin. Friends and family will be received Monday from Noon till time of funeral service at 3 P.M. at the William Snyder Funeral Home, 521 Main Street, Irwin, 724-863-1200. Interment will be on Tuesday at 1 p.m. at the Evergreen Cemetery, 799 Baltimore Street, Gettysburg, PA 17325. Memorial contributions can be made to METAvivor Research and Support, 1783 Forest Drive #184, Annapolis, MD 21401. For online condolences please visit www.snyderfuneralservices.com.

Sophia K. (Yelovich) Holland, age 42, of Irwin, formerly of Orrtanna, passed away Thursday, November 25, 2021. She was born September 4, 1979 in Teaneck, New Jersey, a daughter of V. Rev. Elias and Bonnie Yelovich. She was an Orthodox Christian... View Obituary & Service Information

The family of Sophia K. (Yelovich) Holland created this Life Tributes page to make it easy to share your memories.