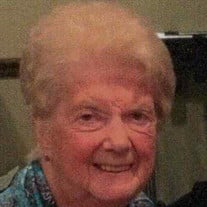 Shirley A. (Lewis) McCune, 87, of North Huntingdon, passed away, April 17, 2021. She was born in Shawtown, North Huntingdon, November 15, 1933, to the late William and Elizabeth (Gust) Lewis. Shirley graduated from North Huntingdon High School in 1951. She was married to the late William McCune. Upon graduation, Shirley began working as a clerk at Irwin Bank and Trust Company, and then at Columbia Gas Company in Jeannette, where she advanced in her career and eventually became Area Manager of the Jeannette office. She was employed by Columbia Gas for over 40 years. Later in life, she reunited with her high school sweetheart, Bill McCune, and the two were married in 2006. Shirley was an avid bowler and bridge player, appearing on WTAE’s Women’s Championship Bowling numerous times. She was a long-time citizen of Steeler Nation, holding season tickets for over 50 years. She travelled extensively, with trips to China, Australia, Tahiti, and across much of Europe. She loved to dance, and she and Bill could be found most Saturday nights swing dancing to the big band sound at various clubs in the area. She was a long-time member of First United Methodist Church, Irwin, and the board of directors of the Salvation Army of Jeannette. She is survived by her niece Jane Pogue, nephew Rick (Melanie) Dyer, nephew Frank (Cheryl) Pogue, niece Shirley (Ray) Fisher, niece JoAnn (Bob) Dixon, great-nephews Greg and Jason (Kristen) Pogue, great nieces Chelsea (John) Collins and Erin Pogue, along with William’s children Laura Anderson, Sheila McCune, Cindy (Terry) Clalfant-Rimel, and Bill (Cindy) McCune. In addition to her parents and husband she was preceded in death by her sister Velma (the late Robert) Pogue, and nephew James Pogue. Friends will be received from 2 to 4 and 6 to 8 p.m. Monday at the William Snyder Funeral Home, 521 Main Street, Irwin. A funeral service will be held Tuesday, April 20th at 10:00am in the funeral home followed immediately by internment at Penn-Lincoln Memorial Park. A remembrance luncheon will be held at the First United Methodist Church, 310 Oak Street, Irwin, following the internment. In lieu of flowers, donations can be made to Salvation Army of Jeannette or the Redstone Highland in North Huntingdon. For online condolences please visit www.snyderfuneralservices.com.

The family of Shirley A. Lewis McCune created this Life Tributes page to make it easy to share your memories.

Send flowers to the McCune family.