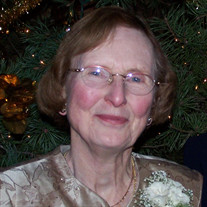 Sara C. “Sally” (Clow) Hildbold, age 90, of Irwin, passed away on Saturday, October 19, 2019. She was born November 6, 1928 in Braddock, a daughter of the late James and Mary Ellen Clow. She was a long time member of First United Methodist Church in Irwin where she held various positions, taught the B.Y.K.O.T.A. Sunday school classes and helped with the Western PA Conference of the United Methodist Churches. She earned a Master’s of Elementary Education from Pitt University and taught in the Edgewood School District, then was a Supervisor of Student Teaching at IUP before teaching many years for the Norwin School District at the elementary, junior and senior high before retiring. She was a member of the PHI MU sorority, the Alumni of PITT and a Past Matron of the Eastern Star. In addition to her parents, she is preceded in death by her husband Charles Franklin Hildbold Sr. She is survived by her children Rev. Charles F. (Cheryl) Hildbold Jr. of Jennerstown, Ellen (Norman Gotter) Hildbold of Vienna, Virginia and Sally L. (Daniel) Metz of Irwin; grandchildren Kara (Pete) Zatolochenko, Charles “Charlie” (Carolann) Hildbold III, Carrie (Ben) Floyd, Caitlin (Scott) Huber, Jessica (Cody) Domasky, Nicole Metz, Samuel Gotter, Caleb Hildbold, Sally Kate Gotter; 9 great grandchildren; and sister Shirley Garrity. Friends and family will be received from 1 to 3 and 6 to 8 p.m. Monday at the William Snyder Funeral Home, 521 Main Street, Irwin, 724-863-1200. Everyone will gather at 11 a.m. Tuesday for a funeral service at the First United Methodist Church in Irwin with Rev. Charles F. Hildbold Jr. officiating. Interment will follow at Union Cemetery in Irwin. The family wants to thank Heartland Hospice and caregivers Adrienne and Michele for their loving care. Memorial contributions can be made to the Alzheimer’s Association at www. Alz.org. For online condolences please visit www.snyderfuneralservices.com.

The family of Sara "Sally" C. (Clow) Hildbold created this Life Tributes page to make it easy to share your memories.