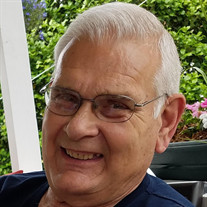 Samuel T. Oplinger, 77, of Penn Township, passed away February 19, 2020. He was born March 13, 1942 in Arona, a son of the late Clifford T. and Ruth (Whitehead) Oplinger. Prior to his retirement Sam worked as a truck driver for Best Feeds, Oakdale,... View Obituary & Service Information

The family of Samuel T. Oplinger created this Life Tributes page to make it easy to share your memories.

Send flowers to the Oplinger family.