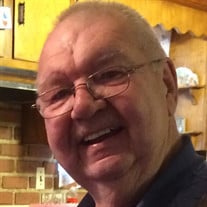 Roy William Stoves Sr., 77, of Irwin, passed away Thursday April 27, 2017 in Allegheny General Hospital, Pittsburgh. Roy was born September 5, 1939 in Jeannette a son of the late Edward and Bella (Hummelsine) Stoves of North Irwin. The second of five sons, he graduated from Irwin High School in 1957. Roy retired in 2003 from Emerson Electric, formerly Westinghouse, where he served as president of the Westinghouse Credit Union. Roy enjoyed woodworking, golf, Sudoku, and watching Fox News. He is best known for his great sense of humor, his laugh, long story telling, and his many friends. Roy was a member of Suburban Community Church, Irwin, and Jeannette Lodge No. 750, Free and Accepted Masons. He and his wife are one of the last remaining original residents in his neighborhood and everyone would look for them sitting on their porch. In addition to his parents he is preceded in death by his son R. William Stoves Jr. and his brother Edward Stoves Jr. Roy is survived by his wife of 56 years, Eleanor (Virone) Stoves; his daughter Donna Stoves of Irwin; daughter in law Christa Stoves of New Stanton; his grandchildren Angela Stoves of Jeannette, Anthony Stoves of Grapeville, and Thomas Stoves of New Stanton; great grandson Dean William Stoves; brothers David (Judy) Stoves of FL, Gordon (Jeannette) Stoves of North Irwin and Donald (Suzette) Stoves of North Versailles; also many nieces and nephews. At Roy’s request there will be on viewing. A memorial service will be held at Noon on Monday at Suburban Community Church, 1787 Arona Rd., Irwin, with his pastor Rev. Paul Baer, officiating. The family will receive friends one hour prior to the service in the church sanctuary. For online condolences please visit www.snyderfuneralservices.com.

The family of Roy W. Stoves Sr. created this Life Tributes page to make it easy to share your memories.