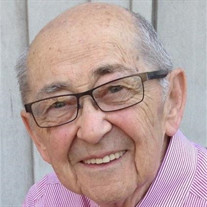 Ross F. Walton, Jr., 93, of North Huntingdon, passed away Thursday September 20 2018, in UPMC East, Monroeville. He was born July 11, 1925, a son of the late Ross F. Sr. and Edna (Hoak) Walton and was also preceded in death by his first wife Lois (Williams) Walton in 1990, a brother Harry C. Walton, sister in law Naomi Walton, and brother in law Wilbur Dudley. He was a graduate of Norwin High School, class of 1943, served in the Army, and graduated from Duff’s Business School. Prior to retirement Mr. Walton was owner of R & H Screw Machine Company, the Walton Insurance Agency, as well as Walton Real Estate. He was a lifelong member of Westmoreland City Primitive Methodist Church where he was church organist for 70 years, served on the church Trustee Board, and acted as the church’s financial secretary. He was secretary-treasurer of the Trustee Board of the Primitive Methodist Church in the U.S.A. and chairman of the denomination’s Primitive Methodist Investment Foundation. He served on the board of directors of Manor Bank acting as vice president and chairman of the board. He was a member of Bethel Park Lodge, No 761, F. & A. M., the Ancient Accepted Scottish Rite, Valley of Pittsburgh, and Syria Temple. He served his community as president and treasurer of the Norwin Chamber of Commerce and for eleven years chaired the committee which organized the annual Norwin Community Picnic at Idlewild Park. He was a member of Westmoreland City Volunteer Fire Department, the Manor American Legion, and volunteered at the Manor Food Pantry. He dedicated his life to serving his church and his community. Surviving are his wife of 26 years Audrey (Carr) Walton; his children Rev. Diane Wiley of Irwin, and Franklin J. Walton and his wife Callie Herzog of Brooklyn, NY; his grandchildren Jesse Walton and his wife Courtney Secor of Seattle, WA, Melissa Wiley of Pittsburgh, and Emma Walton and her husband Jesse Shapell of Brooklyn, NY; sisters in law Delores Dudley, Dolores Doshen, and Loretta Poteste; also nieces and nephews. Friends will be received from 2 to 4 and 6 to 8 p.m. Monday at the William Snyder Funeral Home, 521 Main Street, Irwin, 724-863-1200, where a funeral service will be held at 11 a.m. Tuesday with his daughter Rev. Diane Wiley and Rev. Daniel Pastorius, officiating. Interment will follow in Union Cemetery. In lieu of flowers a contribution can be made to Westmoreland City Primitive Methodist Church, P.O. Box 147, Westmoreland City, PA 15692. For online condolences please visit snyderfuneralservices.com.

Ross F. Walton, Jr., 93, of North Huntingdon, passed away Thursday September 20 2018, in UPMC East, Monroeville. He was born July 11, 1925, a son of the late Ross F. Sr. and Edna (Hoak) Walton and was also preceded in death by his first wife... View Obituary & Service Information

The family of Ross F. Walton Jr. created this Life Tributes page to make it easy to share your memories.

Send flowers to the Walton family.