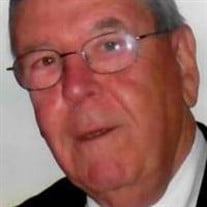 Ronald F. Wiesner, age 82, of North Huntingdon, passed away Wednesday, March 15, 2017. He was born October 18, 1934 in Pittsburgh, a son of the late Frank J. and Alice (Daffern) Wiesner. In addition to his parents, he is preceded in death by his brother Richard L. Wiesner; and infant grandson Samuel M. Gorseth. He is survived by his wife of over 55 years Joan (Dvorsky) Wiesner; children Kimberly Wiesner Gorseth and Ronald D. (Alice) Wiesner both of Cranberry Twp.; grandchildren Tanner and Hannah Gorseth and Sophie and Elizabeth Wiesner who called him “Gramp”; sister Sue (David) Wiesner Lonabaugh of Murrysville; Brother-in-law Robert (Leslie) Devore of Canonsburg; sister-in-law Mary Lou Wiesner Rilee of McDonald; nieces and nephews; and grandnieces and grandnephews. He was a dedicated family man who cherished his family and prompted other family members to return their love and respect. He held high and deep respect for those who demonstrated loving family relationships. Originally from Greenfield, he was a graduate of the University of Pittsburgh with a Bachelor and Master Degree in Business Administration and was a proud former member of the University of Pittsburgh Varsity Marching Band and Sigma Chi Fraternity. He was also a life member of the University of Pittsburgh Alumni Association, The Chancellor’s Club and Founder’s Society and Team Member in the University Program. He served in the United States Army as a Second and First Lieutenant with a final rank of Captain in the Army Reserves. He retired from United States Steel Corporation’s International Treasury, Cooper Industries and Pittsburgh National Bank in various financial and credit positions. He was a member of Holy Trinity Lutheran Church in Irwin, the Shidle Lodge No. 601 F.&A.M. in Irwin, The Ancient Accepted Scottish Rite, Valley of Pittsburgh, Syria Shrine, the Royal Order of Jesters Court No. 2 Pittsburgh, McKeesport Caravan No. 4, Penn Hills Caravan No. 20, O.L. Verein, The Fellows Club of Pittsburgh, Norwin Elks and the Jacktown Ride and Hunt Club. In the Shrine, he was a former Aide and Ambassador for several Potentates, a former Lieutenant and present member of The Syria Motor Corps (Classic Car Division). He was the Past President of the Pittsburgh Shrine Luncheon Club and Past President and Secretary/Treasurer of the Mon Valley Shrine Luncheon Club. Friends and family will be received 2 to 4 and 6 to 8 p.m. Sunday at the William Snyder Funeral Home, Inc., 521 Main Street, Irwin, 724-863-1200. A funeral service will be held at 11 a.m. Monday at the Holy Trinity Lutheran Church in Irwin with Rev. Dr. Clifton J. Suehr officiating. Interment will follow at Mount Vernon Cemetery in McKeesport. A Masonic funeral service will be held at 7:30 p.m. Sunday in the funeral home. Memorial contributions can be made to the Shriners Hospitals for Children at www.shrinershospitalsforchildren.org. For online condolences please visit www.snyderfuneralservices.com.

Ronald F. Wiesner, age 82, of North Huntingdon, passed away Wednesday, March 15, 2017. He was born October 18, 1934 in Pittsburgh, a son of the late Frank J. and Alice (Daffern) Wiesner. In addition to his parents, he is preceded in death by... View Obituary & Service Information

The family of Ronald F. Wiesner created this Life Tributes page to make it easy to share your memories.

Send flowers to the Wiesner family.