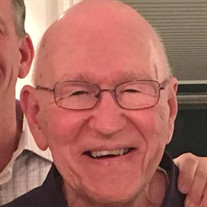 Robert E. Hodder, 86, of North Huntingdon, went to be with the Lord on Thursday, March 18, 2021. He was born on November 24, 1934 in East McKeesport, He was the beloved husband of Charlene Benedict; brother of Elinor (Joe) Ponsetto and Linda (Bill) Campbell; loving father of Lisa (John) Jurczak of Irwin; Leslie (Dan) Sorg of Scottdale; and Robert (Susan) Hodder of Mars; cherished Pap of grandchildren, Nathan (Michaela), Elizabeth, and Janie Hodder of Mars and Amber Sorg of Waterford, MI. He was preceded in death by his first wife, Elizabeth (Severino) Hodder, his parents, Paul Hodder and Jane (McKeown) Hodder, and his brother, Paul Hodder. He was a 43-year employee of Westinghouse Electric Corporation, starting in their fledgling computer science program and working his way up into various leadership positions until retiring in 1996. At the time of his retirement he was then the longest-tenured employee of Westinghouse. He was an unabashed Anglophile who while employed by Westinghouse spent time living and working in England. This allowed him to indulge in his favorite sport, English football. He shared a passion with his son and grandson for Liverpool FC and loved to watch their matches together. Bob was an outstanding, multisport athlete at East McKeesport High School, graduating in 1952. After graduating he became an avid fast-pitch softball player for several teams in McKeesport and Greensburg. His teams competed on a local and national level and even competed in several world fast-pitch tournaments. He played for over 20 years, finally retiring from the game at age 44. He was a long-time member of Christian Life Church in Trafford where he was an elder. He was also a teacher at Christian Life and worked with various youth groups. In retirement, he enjoyed weekly lunches with his many friends and also loved nothing more than to spend time with his grandchildren. He was always in attendance at his grandkid’s games, school events, recitals, plays, and musicals, regardless of where, when, or how boring. Due to the covid-19 pandemic all arrangements are private. In lieu of flowers, donations can be made to Wounded Warriors www.woundedwarriorproject.org or the Westmoreland County Food Bank westmorelandfoodbank.org. The William Snyder Funeral Home, Irwin, is in charge of arrangements. For online condolences please visit www.snyderfuneralservices.com

Robert E. Hodder, 86, of North Huntingdon, went to be with the Lord on Thursday, March 18, 2021. He was born on November 24, 1934 in East McKeesport, He was the beloved husband of Charlene Benedict; brother of Elinor (Joe) Ponsetto and Linda... View Obituary & Service Information

The family of Robert E. Hodder created this Life Tributes page to make it easy to share your memories.

Send flowers to the Hodder family.