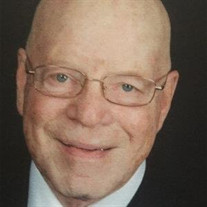 Robert “Bob” C. McDade, age 80, passed away Thursday March 17, 2016. He was born March 28, 1935 in Pittsburgh, a son of the late Charles and Marion (Deuel) McDade. He was a long time member of the First Presbyterian Church in Irwin where he served as an elder and was known as the handyman. He was a former trustee of the First Presbyterian Church in Edgewood and was passionate about the Boy Scouts where he was an Eagle Scout. He and his wife enjoyed bicycling and participating in the Western PA Wheelmen Bike Club. In addition to his parents, he is preceded in death by a brother Steve McDade. He is survived by his wife of over 57 years Cornelia (Curtiss) McDade; children Donald (Jackie) McDade of Pittsburgh, Mark (Amy) McDade of Camarillo, California, Wendy (Heather) McDade Romeo of Wexford and William (Gina) McDade of Ramsey, New Jersey; grandchildren Evelyn, Robert, Anna, Curtiss, Haley, William, Andrew and James; and brother Tom McDade from Pittsburg, California. A memorial service will be held 11 a.m. Monday at the First Presbyterian Church in Irwin with Rev. Dr. Ronald H. Wakeman officiating. In lieu of flowers, memorial contributions can be made to the First Presbyterian Church, 617 Main Street, Irwin. Arrangements handled by the William Snyder Funeral Home, Inc., 521 Main Street, Irwin, 724-863-1200. For on-line condolence please visit www.snyderfuneralservices.com.

The family of Robert "Bob" C. McDade created this Life Tributes page to make it easy to share your memories.

Send flowers to the McDade family.