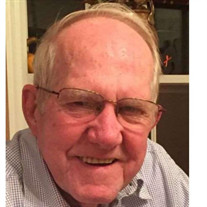 Richard "Dick" Keith Pealstrom, 93, passed away on Tuesday March 30, 2021. He was born in Holland, Michigan on October 11, 1927, but spent the majority of his childhood in Rock Island, Illinois where he graduated from Rock Island Senior High School. Following graduation, he enlisted in the Navy in September 1945. He graduated from two Navy radio communications schools and served as a communication technician in radio intelligence both on the island of Guam and at the Naval Intelligence Headquarters in Washington, DC, until his discharge in October, 1948. After his service, he attended Bradley University in Peoria, Illinois, where he received a BS degree in mathematics and worked as an Admission counselor at the University until his graduation. He then travelled to Wilmerding, PA, where he started working at the Westinghouse Air Brake Company (WABCO). It was here that he met his wife of 65 years, Lois “Audrey” Pealstrom, on a blind date. He retired from WABCO after 35 years as Manager, Advertising & Sales Promotion. He was well known for his creative ad campaign for painting the COBRA brake shoes red, and the Secret Order of the Red Cobra for his sales team. While employed, he also served on the Board of Directors of the WABCO Federal Credit Union and was elected President of the Association of Railway Advertising Managers, an international organization. Upon retirement, he continued to stay active. He was a founding member of the Board of Directors of the George Westinghouse Museum Foundation and served in several offices for the twenty years of its existence. He was also a founding elder of the West Hempfield Presbyterian Church, where he was the Chairman of the Building Committee for their first edifice. In recent years, he was able to discuss his Navy work and became a member of the US Naval Cryptologic Veterans Association. Dick and Audrey shared a love of history by volunteering at the Westmoreland County Historical Society where they assisted in organizing and cataloging collections. In his spare time, he was an avid golfer (shooting his age at age 88), a creative and talented wood-worker, an enthusiastic collector of eagle figurines, and a voracious reader with a love of learning. His family always looked forward to his unique homemade birthday cards and Christmas gifts. Richard was preceded in death by his parents Ruben and Anna (Hultgren) Pealstrom; and a brother and sister in-law Eugene (Joan) Pealstrom. He is survived by his wife, Audrey (88), his son Keith Carlson Pealstrom of Westmoreland City, his daughter Kirsten Pealstrom Colen of Charlottesville, VA, 4 grandchildren: Erika McChesney, Stephanie Colen, Dustin Pealstrom and Jonathan Colen, one great-grandchild, Olivia McChesney; and a brother Jerry (Joanie) Pealstrom of Cumming, GA. Services and interment will be private. William Snyder Funeral Home Inc., Irwin, 724-863-1200, is in charge of arrangements. In lieu of flowers, the family requests donations are given to the West Hempfield Presbyterian Church, 8 W Hempfield Drive, Irwin, PA 15642. For online condolences please visit www.snyderfuneralservices.com.

Richard "Dick" Keith Pealstrom, 93, passed away on Tuesday March 30, 2021. He was born in Holland, Michigan on October 11, 1927, but spent the majority of his childhood in Rock Island, Illinois where he graduated from Rock Island Senior High... View Obituary & Service Information

The family of Richard "Dick" K. Pealstrom created this Life Tributes page to make it easy to share your memories.

Send flowers to the Pealstrom family.