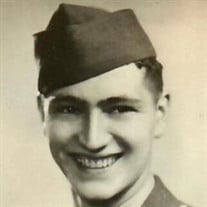 Raymond C. Siegel Sr., 94, a resident of Weatherwood Manor, Greensburg, formerly of Irwin, died Thursday April 18, 2019. He was born September 7, 1924 in Cereal, North Huntingdon Township, a son of the late William George and Helga (Carlson) Siegel. Ray was a veteran of WWII having served in the Army Air Corps and participated in the Normandy Invasion on D-Day plus 1. He was a graduate of Norwin High School, Class of 1942 and received his master’s degree in education from California University of Pennsylvania. He was a school teacher and basketball coach at Penn Trafford School District before becoming a longtime insurance agent for Nationwide Insurance. He was a member of First United Church of Christ, Irwin, a Paul Harris Fellow and former member of Norwin Rotary Club and a member of the American Legion Post 359 and Veterans of Foreign Wars, Post 781, both of Irwin. He loved to golf and was a member Hannastown Country Club. In addition to his parents he is preceded in death by his former wife Ruth (Frick) Kelly; his former longtime companion Lillian Clinebell; and siblings G. Norman Siegel, Ruth Kunkle, and George William Siegel. He is survived by his children Raymond C. (Marsha) Siegel Jr. of Tucson, AZ, Rhonda (Mike) Picard of Irwin, Robin (Steve) Timm of Simi Valley, CA, and Renee (Dann) Siegel Rothwell of Irwin; his grandchildren Traci Siegel, Evan Picard, Adam (Melissa) Picard, Robert (Amanda) Timm, Lauren Timm, D.J. Rothwell, and Kylee Rothwell; his sister in law Doris Siegel of North Huntingdon; also nieces and nephews. Friends will be received from 2 to 4 and 7 to 9 p.m. Monday at the William Snyder Funeral Home, 521 Main Street, Irwin, 724-863-1200. A funeral service will be held at 11 a.m. Tuesday in First United Church of Christ, 400 Main Street, Irwin. Those attending the service please go directly to the church. In lieu of flowers a contribution can be made to First United Church of Christ, Irwin, or Heritage Hospice. For online condolences please visit www.snyderfuneralservices.com.

The family of Raymond C. Siegel Sr. created this Life Tributes page to make it easy to share your memories.

Send flowers to the Siegel family.