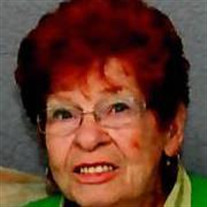 Phyllis F. (Pickett) Thiem, 82, of Irwin, died Thursday, May 10, 2018 at Hempfield Manor, Greensburg. She was born June 29, 1935 in Flemington, WV, the daughter of the late Ovid Festtes Pickett and Mary Louise (Snider) Jack and was also preceded in death by a grandson Richard Lee Nicholas Jr. and a brother Jamie Andre Pickett. Phyllis was a former employee of First Student, a former seamstress for Dante Fashions, and Annette Fashions, and was a former hairdresser. She served on Irwin Borough Council from 2005 to 2015 and was a member of the Democratic Committee, the ILGWU, and the Moose Lodge and Fraternal Order of Eagles, both of Irwin. Surviving are her step father Robert Jack of Apollo; her children Chutty Bender (Marcia Clark) of Salem, OH, Lanny Bender (Carol) of Chippewa Township, Candy Greiner (Chuck) of Irwin, Cookie Nicholas of Greensburg, Shelly Glass of Irwin, and Marjorie Gongaware (Rich Todd) of Scottdale; her grandchildren Jenna Nicholas, Nina Glass, Travis, Justin, and Austin Gongaware, and Christie, Joshua, and Jesse Bender; and her great grandchildren Linsay Gongaware, and Hayden, Caroline, and Maverick Bender. Friends will be received from 4 to 8 p.m. Monday at the William Snyder Funeral Home, 521 Main Street, Irwin, 724-863-1200, where a funeral service will be held at 11 a.m. Tuesday with Dr. Ronald H. Wakeman, officiating. Interment will follow in Greenwood Memorial Park, Lower Burrell. The family would like to thank the caregivers of Hempfield Manor and Three Rivers Hospice for all the kind and compassionate care. In lieu of flowers a contribution can be made to Hempfield Manor, 1118 Woodward Dr., Greensburg, PA 15601. For online condolences please visit snyderfuneralservices.com.

The family of Phyllis F. Thiem created this Life Tributes page to make it easy to share your memories.

Send flowers to the Thiem family.