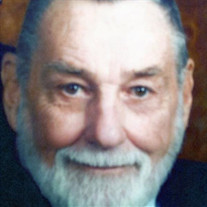 Paul A. Lees Sr., 88, of Monroeville, died Monday February 18, 2019. He was born May 31, 1930 in Braddock, a son of the late James and Victoria (Shirer) Lees and was also preceded in death by his wife Audrey Mae (Hill) Lees on September 18, 2018, and a brother James Lees Jr. Paul was a Navy veteran of the Korean Conflict and a retired business officer manager for AT&T. He was a member of Cross Roads Presbyterian Church, Monroeville, where he served as a church trustee and was active with the Men’s Association. He was also a member of Shidle Lodge No. 601, F&AM, Irwin, and Syria Temple, Pittsburgh. He is survived by his sons Paul A. Lees Jr and his wife Joan F. of Monroeville and Bryce M. Lees of Wilkins Township; his granddaughter Kira Ann Lees; also nieces and nephews. The family will received friends from 10 to 11 A.M. Tuesday March 5, at Cross Roads Presbyterian Church, Haymaker Rd., Monroeville, PA 15646, with a memorial service following at 11 A.M. in the church sanctuary. Interment with Navy honors will be at a later time in the National Cemetery of the Alleghenies. In lieu of flowers a contribution can be made to Shriner’s Hospitals for Children, at www.shrinershospitalsforchildren.org or 2900 Rocky Point Dr., Tampa, FL 33607. The William Snyder Funeral Home, Irwin, is in charge of arrangements.

The family of Paul A. Lees Sr. created this Life Tributes page to make it easy to share your memories.