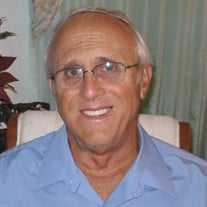 Myron Elder, 89, of North Huntingdon, completed his journey on Earth on October 5th and has started his new one in the Lord’s home. He was born in Turtle Creek, PA to a loving Christian mother Mary (Woodburn) Elder and Myron J Elder on January 29, 1932. He was preceded in death by his wife Shirley (Blair) Elder of 55 years, his mother, Mary, and his brother James Elder. Myron is survived by his two sons Robert (Joanne) and William (Jackie), two daughters Cheryll (Steve) and Debra (Glenn), seven grandchildren and eight great grandchildren. He is also survived by Aileen Godfrey, his senior companion of 13 years and sister in law Jean Elder. After graduating in 1949, Myron devoted two years of his life to the US Army in Germany. Shortly after graduation, he married his high school sweetheart in 1952 and began in the construction field as a laborer. Myron happily retired on his 61st birthday in 1993 as a Superintendent, and began him and Shirley’s passion of traveling throughout all 50 states and 2 countries. Myron enjoyed being a member of Presbyterian Churches in the North Huntingdon area when he wasn’t spending 26 retired winters between Florida and Arizona. When he wasn’t traveling, Myron volunteered his time at the Habitat for Humanity, delivering Meals on Wheels, and supervising both Irwin’s Salvation Army and Presbyterian Church food pantry. In his 70’s and 80’s, he loved turning his garage into a wood shop and building both indoor and outdoor crafts for loved ones. When asked how he was doing, his favorite reply to you was “the sun shines every day in my life, but I spell sun (SON).” Friends and family will be received Friday from 10 a.m. till time of funeral service at noon at the William Snyder Funeral Home, 521 Main Street, Irwin, 724-863-1200. Interment will follow at Penn Lincoln Memorial Park in North Huntingdon Twp. In lieu of flowers, contributions can be made to the American Diabetes Association at diabetes.org. For online condolences please visit www.snyderfuneralservices.com.

Myron Elder, 89, of North Huntingdon, completed his journey on Earth on October 5th and has started his new one in the Lord&#8217;s home. He was born in Turtle Creek, PA to a loving Christian mother Mary (Woodburn) Elder and Myron J Elder on... View Obituary & Service Information

The family of Myron D. Elder created this Life Tributes page to make it easy to share your memories.

Myron Elder, 89, of North Huntingdon, completed his journey on...

Send flowers to the Elder family.