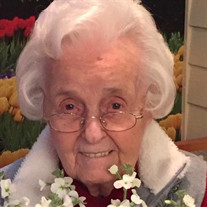 Miriam Owen (Phillips), of Penn Township, passed away Friday morning in the loving arms of her daughter Christine. Miriam was 92. The youngest daughter of Joseph Henry and Elizabeth Phillips, Miriam was born in Bedlinog, South Wales, UK on March 18, 1925. Miriam was raised in Bedlinog, where she met and would later marry her sweetheart, Robert Owen, on December 26, 1945. Miriam and Robert left Wales in 1949 as Robert pastored churches across Great Britain, and together had three children, Gerald, Cledwyn, and Christine. In 1959 Miriam, Robert, and their children immigrated to the United States, as Robert took senior pastor positions in Oshkosh and Green Bay, Wisconsin. In 1973 they moved to Pittsburgh, to lead South Hills Assembly of God. During this time they began travelling extensively, preaching the gospel across the world, which continued long after their retirement from South Hills in 1990. Miriam was beloved in all of the churches she served, and though Robert was the face of their ministry, Miriam was the rock and support behind it, as she was the rock and support of her family and those close to her. Gentle, caring, and ever smiling, Miriam was always ready with a kind word, and even as she battled dementia in her final years, she never stopped smiling Miriam is now reunited with her beloved Robert in glory, praising their Saviour for all of eternity. She is survived by her children Gerald (Pamela), Cledwyn (Cindi), and Christine (Carson); grandchildren Christopher (Stacie), Geoffrey (Annie), Stephanie (Steve), Chelsea (Ken), Aaron (Laura), and Christopher; and great-grandchildren Avery, Gavin, Camryn, Kelsie, Salome, Celti, Katalina, Lexis, Ethan, Ava, Titus, Owyn, Henryk, Tegan, Rowan, and Soren. Friends will be received from 11:00 a.m. to 12:15 p.m. Saturday, February 10, at Jeannette Assembly of God, 246 Pleasant Valley Road, Jeannette, PA 15644, where a funeral service will follow in the church sanctuary. Interment will follow in Twin Valley Memorial Park. In lieu of flowers, a donation may be made to the Miriam Owen Memorial Scholarship Fund at Hillcrest Christian Academy, which they founded during their time at South Hills Assembly (Hillcrest Christian Academy 2500 Bethel Church Road Bethel Park, PA 15102 or http://www.hillcrestca.org/donate-now). William Snyder Funeral Home, Irwin, is in charge of arrangements. For online condolences please visit snyderfuneralservices.com

Miriam Owen (Phillips), of Penn Township, passed away Friday morning in the loving arms of her daughter Christine. Miriam was 92. The youngest daughter of Joseph Henry and Elizabeth Phillips, Miriam was born in Bedlinog, South Wales, UK on... View Obituary & Service Information

The family of Miriam Phillips Owen created this Life Tributes page to make it easy to share your memories.

Send flowers to the Owen family.