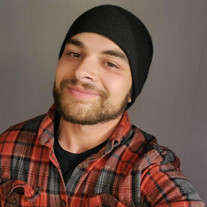 Michael V. Davis, age 26, of Manor passed away Wednesday, June 24, 2020. He was born July 3, 1993 in Monroeville, a son of Mike and Linda Davis. He attended California University where he made lots of friends and started working in landscaping. He is preceded in death by his grandfather James Comunale. In addition to his parents, he is survived by his brother Jonathan Davis; sister Emily (Anthony) Runco; grandparents Bernadette Comunale, J.Keith (Diana) Davis; Mary Ruth (Ward) Kelsey; numerous Aunts, Uncles, and relatives as well as special friends Dave, Ashley, Nicole, CJ, and Alexandra. Michael had an inherent idealism and eternal optimism that fueled his zest for life. He spread this zest to everyone he met. Addiction ended Michael’s life but his light will shine forever. Michael was “just a guy trying to make the world a better place,” as his Facebook biography reads. Everyone who knew him would agree that phrase is fitting. After years of struggle, Michael lost his battle with addiction. Throughout his war, he never let it define him. His goal was always to help people through difficult times. Michael was the type of person to go out of his way just to make someone smile. He was beaming with positivity and was determined to be the best version he could be. He enjoyed a variety of things such as watching sports, learning to play guitar, hanging out with friends and family, and listening to music - especially (the band) Dance Gavin Dance. If you or someone you know is struggling with addiction, please call 1-800-662-4357 or visit https://www.samhsa.gov. It is okay to get help, and you are not alone. Everyone will gather Monday for visitation from 11 a.m. till time of funeral service at noon at the Christian Life Church in Trafford. Private interment will follow. Arrangements handled by the William Snyder Funeral Home, 521 Main Street, Irwin, 724-863-1200. Memorial contributions can be made to Sage’s Army to help with the opioid epidemic at www.sagesarmy.com. For online condolences please visit www.snyderfuneralservices.com. “This is not goodbye, just see you later.”

Michael V. Davis, age 26, of Manor passed away Wednesday, June 24, 2020. He was born July 3, 1993 in Monroeville, a son of Mike and Linda Davis. He attended California University where he made lots of friends and started working in landscaping.... View Obituary & Service Information

The family of Michael V. Davis created this Life Tributes page to make it easy to share your memories.

Send flowers to the Davis family.