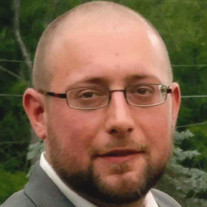 Mathew A. Wilson, 35, of Greensburg died Monday June 28, 2021 in UPMC Presbyterian Hospital. He was born December 2, 1985 in Pittsburgh, the son of Victoria (Pagliarulo) Wilson Hustwit of Greensburg and the late Richard John Wilson. He is also survived by his step father Edward C. Hustwit. In addition to his father he is preceded in death by his grandparents Joseph and Eileen Wilson. Matt was a graduate of Heritage Christian School, Plum, and attended Forbes Culinary School. He worked as a warehouse fulfillment specialist. Matt loved to cook, fish, play guitar, and play cards especially poker. He enjoyed the paranormal, loved fireworks, and was obsessed with the television show “The Office”. Friends and family will always think of him when they sit around a campfire enjoying the outdoors. In addition to his parents he is survived by his girlfriend Angela Tomanio; his siblings Timothy (Melissa) Wilson and Bethany (Aaron) Morrison; nieces and nephew Mila, Laena, Shalynn, and Vincent; his grandparents Frank and Angela Pagliarulo and Anne and Edward T. Hustwit; aunts and uncles Dennis Wilson, Christine Wilson, Peggy (Mike) Ducko, Joyce (Ron) Skena, Michael (Mary Kay) Pagliarulo, Pamela (Wayne) Kingsland, and Christine (Ron) Chamberlain; and also many cousins. Friends will be received from 1 to 3 and 5 to 8 p.m. Thursday at the William Snyder Funeral Home, 521 Main Street, Irwin, 724-863-1200, where a funeral service will be held at 11 a.m. Friday with Rev. Bruce Judy, officiating. In lieu of flowers a contribution can be made to the American Kidney Foundation at www.kidneyfund.org or Variety the Children’s Charity at www.varietypittsburgh.org. For online condolences please visit www.snyderfuneralservices.com.

Mathew A. Wilson, 35, of Greensburg died Monday June 28, 2021 in UPMC Presbyterian Hospital. He was born December 2, 1985 in Pittsburgh, the son of Victoria (Pagliarulo) Wilson Hustwit of Greensburg and the late Richard John Wilson. He is... View Obituary & Service Information

The family of Matthew A. Wilson created this Life Tributes page to make it easy to share your memories.

Send flowers to the Wilson family.