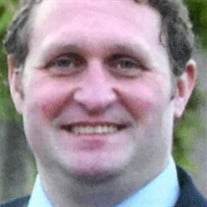 Matthew David Klingensmith Ward, 43, of Fayetteville, NC, formerly of North Huntingdon died Saturday, September 10, 2016. He was born May 10, 1973 in Landstuhl, Germany, and moved to the Fayetteville, NC, area in August 1973 where he grew up. After a time living with his father and attending Norwin schools, he returned to the Fayetteville area graduating from Douglas Byrd High School, in 1991. Matt’s love of adventure led to a diverse range of careers over the years starting at 16 when he was hired by Eutaw Round A Bout Skate Rink, where he learned to DJ and was the occasional party mascot from 1989-1991. He then joined the Navy and left to see the world, eventually settling in the Virginia Beach area. Along the way he discovered a love for Nursing, working for several years as a Critical Care RN and eventually earning his MSN degree from Virginia Commonwealth University of Richmond, VA, in May 2014. He initially worked at Cape Fear Valley Medical Center Intensive Care Unit, and most recently at Sentara Heart Hospital as a Cardiothoracic Surgery Critical Care Nurse Practitioner. Matt enjoyed cooking, spending time with his friends, and exploring the nooks and crannies of wherever he was. He liked to make people laugh and helping others. His smile was always ready. His compassionate spirit will be missed by all who knew him. Left to grieve his sudden loss is his mother, Kathy Klingensmith of Fayetteville; his father, Joe Klingensmith of Larimer; his much loved children, Greg Klingensmith of Holiday, FL, and Gabi Klingensmith and his beloved granddaughter AnnaLee of Shaw AFB, SC; grandfather and step grandmother, Edward and Diane Zack of Arnold, as well as a large family of aunts, uncles and cousins. He is preceded in death by his grandparents, Eva and Joe “Pappy” Klingensmith and Eva and Alfie Richards. A celebration of Matt’s Life will be held in Fayetteville, NC. In lieu of flowers we ask that you share a favorite picture with us, a favorite story or make a donation in Matt’s name to your favorite charity. For online condolences please visit www.snyderfuneralservices.com.

Matthew David Klingensmith Ward, 43, of Fayetteville, NC, formerly of North Huntingdon died Saturday, September 10, 2016. He was born May 10, 1973 in Landstuhl, Germany, and moved to the Fayetteville, NC, area in August 1973 where he grew up.... View Obituary & Service Information

The family of Matthew David Klingensmith Ward created this Life Tributes page to make it easy to share your memories.