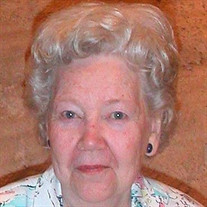 LOIS JUNE (BRESSLER) DREXLER Lois Drexler (89) of North Huntingdon passed away peacefully on Sunday, April 14 at Canterbury Place hospice in Lawrenceville. Lois was born in Pittsburgh on June 27, 1929 to John and Naomi (Miller) Bressler. Lois grew up on Mt. Washington, always living close to her maternal grandmother, Lillian (Dallmeyer) Miller on Albert Street. She loved spending time with her Aunt Anna and playing stoop ball. After her dear brother “Bill” was killed in action during WWII, Lois and her parents moved to Brookline. She attended South Hills High School and after graduation worked as a secretary at a bank in downtown Pittsburgh until her 1952 marriage to Thomas Drexler of Erie. After a brief time in Erie, Lois and Tom moved back to Brookline where they raised their three children until moving to North Huntingdon in 1975. Lois had a beautiful singing voice and was a soloist at many weddings while in her 20’s. Lois enjoyed bowling and playing cards and was a charter member of the now defunct West Highland White Terrier Club of Western Pennsylvania. She enjoyed contacting celebrities to gather donations for the club’s yearly charity auction. Lois was a member of the First Presbyterian Church in Irwin and had recently joined the Phoebe Bayard Chapter of the National Society of the Daughters of the American Revolution. Lois was predeceased by her parents; her brother, John William Bressler, Jr.; and her husband, Thomas. She is survived by her children, June (the late Stewart) Robertson of Greensburg, Joan (Bob Ciardi) and Jonathan Drexler of Irwin; grandson, Michael (Donna) Grandey of St Clair Shores MI; granddaughter, Jessica (Michael) Keefe of Madbury NH; and several great-grandchildren. She will be greatly missed. Friends will be received from 1:00 to 2:00 P.M. Saturday April 20, at the William Snyder Funeral Home, 521 Main Street, Irwin, 724-863-1200, where a memorial service will follow at 2:00 P.M. with Dr. Ronald H. Wakeman, officiating. The family asks that memorial contributions be made to Family Hospice & Palliative Care, 50 Moffett Street, Pittsburgh, PA 15243 (www.FamilyHospicePA.org). For online condolences please visit www.snyderfuneralservices.com.

The family of Lois June Bressler Drexler created this Life Tributes page to make it easy to share your memories.

Send flowers to the Drexler family.