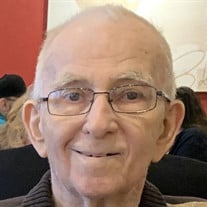 Lloyd Paul Miller, 87, of Irwin, died Tuesday December 31, 2019, at Golden Heights, Irwin. He was born October 9, 1932 in East McKeesport, a son of the late Lloyd P. and Esther Johnson Miller. He was a retired employee of Bell Telephone with 37 years’ service. He was a member of Holy Trinity Lutheran Church, Irwin and a former active member of Lutheran Church of Our Savior, North Huntingdon. He was an Army veteran of the Korean conflict and an avid woodworker and bowler and enjoyed photography. He built both homes his family was raised in. Paul wintered in Florida for many years with his late wife Suzanna and was a loving father and grandfather. In addition to his parents he is preceded in death by his wife Suzanna (Adam) Miller who passed on November 1 of 2019 and brothers Walter and William Miller. He is survived by his children Daniel P. (Joell) Miller, Paula (Tony) DeLuise, and Diane Ozegovich all of North Huntingdon; his grandchildren Danine Miller (Ryan Temoshenka), Faith (Eric) Attanucci, Anna (Corey) Read, Amanda DeLuise, Rachel Ozegovich, Adam Ozegovich, Daniel Brotz, and Abigale Brotz; also numerous nieces and nephews. Friends will be received from 2 to 4 and 6 to 8 p.m. Friday at the William Snyder Funeral Home, 521 Main Street, Irwin. A funeral service will be held at 11 a.m. Saturday in Holy Trinity Lutheran Church with Rev. Sarah Lee-Faulkner, officiating. Interment will follow in Penn Lincoln Memorial Park. The family would like to thank the caregivers of Golden Heights and AHN [email protected] Hospice for all the kind and compassionate care. In lieu of flowers a contribution can be made to Holy Trinity Lutheran Church, 502 Main St., Irwin, PA 15642. For online condolences please visit www.snyderfuneralservices.com.

Lloyd Paul Miller, 87, of Irwin, died Tuesday December 31, 2019, at Golden Heights, Irwin. He was born October 9, 1932 in East McKeesport, a son of the late Lloyd P. and Esther Johnson Miller. He was a retired employee of Bell Telephone with... View Obituary & Service Information

The family of Lloyd Paul Miller created this Life Tributes page to make it easy to share your memories.

Send flowers to the Miller family.