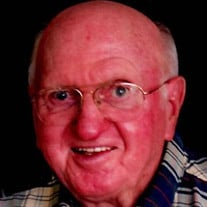 Lee R. Jasper, 87, of Irwin, died Saturday, July 6, 2019 at Westmoreland Manor. He was born March 27, 1932, in Larimer, a son of the late Ladd and Florene (Nedimyer) Jasper. Lee was a graduate of North Huntingdon High School, Class of 1950, and was an Army veteran of the Korean Conflict. Prior to retirement, he was employed as a scientific glassblower at Westinghouse Research, Churchill. He was a member and longtime trustee of the First United Church of Christ, Irwin, and a life member of American Legion Post 359, Irwin. In his early years he was active in drum and bugle corps, including the Pittsburgh Rockets and Westmoreland Esquires. He later coached Little League baseball and directed a Rainbow Girl’s drill team (Lee’s Patriots) for 8 years winning 6 state championships. Lee enjoyed playing golf in the Irwin Retirees ‘and the Westinghouse Golf Leagues, and singing in the S.P.E.B.S.Q Barbershop County Line Chorus. He also enjoyed building and flying radio controlled planes. In his later years, he could be seen at local craft shows selling his novelty glass ornaments. In addition to his parents, he was preceded in death by his twin brother Ladd, a brother Richard, and a sister Louise. Lee is survived by his wife of 65 years, Doris (Graybrook) Jasper; children Wendy (Sam) Bigelow, Jerry Jasper, Jody (Steve) Brunecz, and Roger Jasper; grandchildren Bree Bigelow, Lee Bigelow, and Hunter Brunecz; sister- in- law Mary Alice Jasper. A funeral service will be held 1 P.M. Wednesday in the funeral home with Pastor Steve Craft officiating. In lieu of flowers those wishing may contribute to First United Church of Christ, 400 Main Street, Irwin, PA 15642.

The family of Lee R. Jasper created this Life Tributes page to make it easy to share your memories.

Send flowers to the Jasper family.