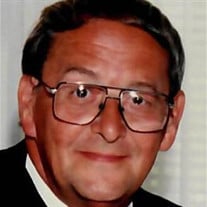 Lawrence M. “Larry” “Flip” Phillips, 79 of Irwin, passed away Sunday January 20, 2019 at home surrounded by his family. He was born April 6, 1939 in McKeesport, the son of the late Adam and Marie (Kaiser) Phillips. Known as Flip from the age of six, he was respected by his loyal friends and students. He was a graduate of McKeesport High School and earned a bachelor’s degree in 1964 from Fort Hayes Kansas State College where he played basketball for four years reaching the NAIA semifinals twice. For the next 34 years he was a dedicated educator. It all began in Paola, Kansas teaching Biology and coaching basketball before moving back to Pittsburgh. He taught Biology and Chemistry at Gateway High School for 29 years and was Facility Manager for athletics working closely with the Athletic Director until becoming Athletic Director for his final three years at Gateway. He was a proud member of the Gateway High School Sports Hall of Fame and served on the nominating committee. Larry enjoyed the beach, cruising, and playing golf. He was an avid sports fan especially Penn State football and the Pittsburgh Steelers, Pirates, and Penguins. He was a Steelers season ticket holder for 40 years. Larry spent many summers golfing and vacationing in Sunset Beach with his golf buddies right after school let out for the summer and later with family and friends. He is survived by his wife of over 52 years Doris E. “Cookie” Phillips, his daughter Erin E. Goodwin and her husband Bruce of Pasadena, MD, and his grandson Brock Goodwin. He thought the best day a Pap could have was watching his grandson pitch or play 1st Base. It was his best medicine! Friends will be received from 2 to 4 and 6 to 8 p.m. Wednesday at the William Snyder Funeral Home, 521 Main Street, Irwin, 724-863-1200, where a blessing service officiated by Rev. Jeffrey Wylie will be held at 11 a.m. Thursday. Interment will follow in St. Joseph Cemetery, North Versailles. The family would like to thank visiting nurse, Allison, and physical therapist, Erin, and Three Rivers Hospice nurses Erica, Kelly, Kathy, and Bonnie, for all the kind and compassionate care. In lieu of flowers a contribution can be made in Flip’s memory to the Penn State Dance Marathon for kids with cancer at www.thon.org. For online condolences please visit www.snyderfuneralservices.com.

The family of Lawrence M. "Flip" "Larry" Phillips created this Life Tributes page to make it easy to share your memories.

Send flowers to the Phillips family.