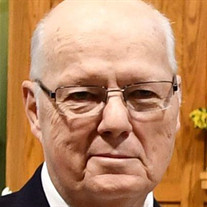 Lawrence J. Helkowski, 73, of Irwin, died Monday January 28, 2019. He was born May 22, 1945, in Scottdale, a son of the late Daniel S. Helkowski, Sr. and Sara Livingston Helkowski and was also preceded in death by his wife, Jacqualine P. Helkowski, and his sister, Patricia Schmook. He was a member of Immaculate Conception Church in Irwin and an Army veteran of the Vietnam Conflict. Lawrence was a graduate of Scottdale High School and the University of Pittsburgh. He worked for 33 years for People's Natural Gas and upon retiring, served as president and CEO of the Westmoreland County Blind Association for thirteen years. Lawrence enjoyed supporting his community, volunteering for the United Way during his time with People’s Gas as well as serving as a member of the Westmoreland County Community College Board of Trustees. In October of 2017, Lawrence was awarded the Pitt-Greensburg Alumnus of Distinction Award for professional achievement and service. He was an avid fan of all University of Pittsburgh athletics, especially football and basketball. He could be found regularly attending their home games with his late wife, Jackie. Surviving are his son and daughter-in-law, Lawrence Scott Helkowski and his wife Julie; grandchildren Andrew and Audrey Helkowski; his brothers Daniel (the late Carol) Helkowski of Baden, Arthur (Sandi) Helkowski of Ruffsdale, and Gregory (Sue) Helkowski of Scottdale; his brother in law Charles Schmook of Scottdale; his sister in law Joanna Kondrath of Orange, CA; numerous nieces and nephews; and many life-long friends and caring neighbors. Friends will be received from 2 to 4 and 6 to 8 p.m. Thursday at the William Snyder Funeral Home, 521 Main Street, Irwin, 724-863-1200. Parting prayers will be held at the funeral home Friday at 9 a.m. followed by a Mass of Christian Burial celebrated at 9:30 a.m. in Immaculate Conception Church. Interment will follow in St. Josef’s Cemetery, Everson. In lieu of flowers a contribution may be made to the University of Pitt-Greensburg or the Westmoreland County Blind Association. For online condolences please visit www.snyderfuneralservices.com.

Lawrence J. Helkowski, 73, of Irwin, died Monday January 28, 2019. He was born May 22, 1945, in Scottdale, a son of the late Daniel S. Helkowski, Sr. and Sara Livingston Helkowski and was also preceded in death by his wife, Jacqualine P. Helkowski,... View Obituary & Service Information

The family of Lawrence J. Helkowski created this Life Tributes page to make it easy to share your memories.

Send flowers to the Helkowski family.