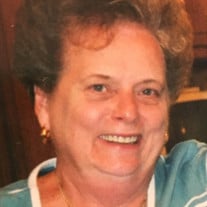 Karlene A. Nerger, 80, of North Versailles, died Sunday August 21, 2016, at home. Karlene was an active member of St. John’s Evangelical Lutheran Church, North Versailles where she was a former Sunday School teacher, nursery worker, greeter, and took care of the church message board for several years. She was also a foster parent for 28 years and welcomed 100 foster children through her home. She is survived by her loving husband of over sixty years, Ronald B. Nerger; her children Kimberly (Roy) Henry, and Karl O. (Laura) Nerger both of Ohio, and Kelli M. Nerger (fiancé Aaron Goughenour) of East McKeesport; nine grandchildren; eleven great grandchildren; step brothers Richard Crowe of North Huntingdon, and Bryan Crowe of Illinois; nieces; nephews; and cousins including Norma Varsafsky, Linda Apelquist, and Judy Hummell who she was raised with like a sister by her late grandparents Ralph and Anna Apelquist all from North Braddock. In addition to her grandparents she is preceded in death by her parents Oliver I. and Elsie (Apelquist) Holsinger her son Keith G. Nerger; step mother Margaret "Peggy" Crowe Holsinger and a step brother Jeffrey Crowe. Friends will be received from 6 to 8 p.m. Tuesday and 2 to 4 and 6 to 8 p.m. Wednesday at the Forgie-Snyder Funeral Home, 1032 Broadway Ave., East McKeesport, 412-823-8083. A funeral service will be held at 1 p.m. Thursday in St. John’s Lutheran Church, 715 Lincoln Hwy., North Versailles, with Pastor Richard J. Krug, officiating. Everyone attending the service go directly to the church. Interment will follow in Monongahela Cemetery. In lieu of flowers a contribution can be made to St. John’s Lutheran Church or the American Cancer Society. For online condolences please visit www.snyderfuneralservices.com.

The family of Karlene A. Nerger created this Life Tributes page to make it easy to share your memories.

Send flowers to the Nerger family.