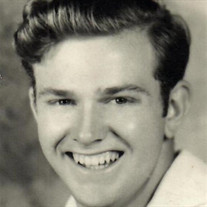 John R. “Jack” Kinsey, 93, of Irwin, passed away peacefully Thursday March 30, 2017. He was born November 9, 1923 in Irwin, a son of the late Russell L. and Returah “Toots” (Stitley) Kinsey and was also preceded in death by his wife of sixty nine years Eleanore B. (Jacko) Kinsey in September 2016, a daughter Marianne Kinsey, a son Thomas L. Kinsey Sr., and a brother Arthur C. “Bud” Kinsey. He was a graduate of Norwin High School, class of 1942, a Navy veteran of WWII having served in the Asiatic Pacific Theatre, a retired employee of Westinghouse Electric Corp., East Pittsburgh and a member of the Church of the Immaculate Conception, Irwin. He was an avid outdoorsman and sportsman. He is survived by his children John R. “Jack” Kinsey Jr. (Diane) of Youngwood, Christine C. Omiatek (Tom) of Ligonier, Sheryl A. Giovanelli (Mike) of Richeyville, Pamela J. Removcik-Widmyer (Joe) of McHenry, MD, Eleanore B. Bucchi (Don) of Greensburg, and Leslie M. Naret (Tony) of North Huntingdon; seventeen grandchildren; twenty great grandchildren; also nieces and nephews. Friends will be received from 2 to 4 and 6 to 8 p.m. Friday at the William Snyder Funeral Home, Inc., 521 Main Street, Irwin, 724-863-1200. A Mass of Christian Burial celebrated at 9:00 a.m. Saturday in the Church of the Immaculate Conception with Father John Moineau, as celebrant. Everyone please go directly to the church. Interment will follow in Immaculate Conception Cemetery. In lieu of flowers a contribution can be made to the American Heart Association at www.heart.org or to a charity of your choice. For online condolences please visit www.snyderfuneralservices.com.

The family of John R. "Jack" Kinsey created this Life Tributes page to make it easy to share your memories.

Send flowers to the Kinsey family.