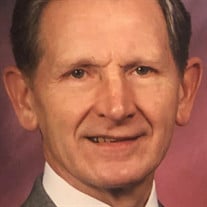 John Dutka, 83, of North Huntingdon, PA, died Sunday, March 10, 2019, at home. He was born May 31, 1935, in Braddock, PA, a son of the late Alexander and Catherine (Senkow) Dutka. John was retired from U.S. Steel, Homestead Works, with 31 years of service. He was an active member of Calvary Church, North Huntingdon, and was one of the church’s founding members. In addition to his parents, he is preceded in death by siblings Olga Prascsak, Alexander Dutka, Walter Dutka, Helen Priatko and Joseph Dutka. He is survived by his wife Dorothy (Wislocky) Dutka; his children Gary Dutka and his wife Suzanne of TX, Stephen Dutka of Claridge, Sharon Kaufman and her husband Paul of North Huntingdon, and Wendy Englund and her husband Bob of VA; his grandchildren Chad Hughes, Kelly Dowdrick, Harley, Sierra, Brett and Tanner Hughes, Aaron and Adam Dutka, and Nolan, Marina and Brendon Englund; his sister Rose Marie Estrella of FL; also a brother-in-law Bill Priatko; sisters-in-law Dorothy Dutka and Virginia McGechie; and nieces and nephews. Friends will be received from 2 to 4 p.m. and 6 to 8 p.m. on Friday, March 15, at the William Snyder Funeral Home, 521 Main Street, Irwin, PA, 724-863-1200. A funeral service will be held at 11:00 a.m. on Saturday, March 16, at Calvary Church, 8653 Pennsylvania Ave., North Huntingdon, with interment following at Penn Lincoln Memorial Park. In lieu of flowers a contribution can be made to Calvary Church. For online condolences, please visit www.snyderfuneralservices.com.

The family of John Dutka created this Life Tributes page to make it easy to share your memories.

Send flowers to the Dutka family.