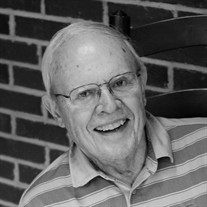 John Spindler Cooper, 87, passed away peacefully on February 15, 2022, surrounded by his family in Columbia, SC, formerly of Irwin. He was born July 31, 1934 in McKeesport, PA, a son of the late James and Dorothy Cooper and was preceded in death by brothers James Cooper, Jerry Cooper, and beloved wife, Shirley Cooper. He is survived by his children David and Sarah Cooper, Bruce and Katherine Cooper, Carol and John Pascutti, and Patty Liverance, along with 16 grandchildren and their 11 spouses and 20 great-grandchildren. His exemplary life was marked by wisdom, hard work, and devotion to family. In every facet of life, he was committed to improving the lives of the people around him as a mentor and friend. John and Shirley were married in 1956 in Pittsburgh and their love story spanned 61 years while living in Pennsylvania, California, Indiana, Georgia, and South Carolina. With a degree in Civil Engineering from Penn State, John worked 23 years for U.S. Steel followed by 30 years with Portec Rail, Inc. where he rose to lead as CEO. He found his work to be rewarding as he enjoyed contributing to the building of America’s bridges, skyscrapers, and railways. An extraordinary father and grandfather, John filled the years with joyful events brimming with music, laughter, sports, and enjoying the marvels of God’s creation. John and Shirley were a dynamic pair whose life verse was Philippians 4:6-7, promising that a life marked by gratitude and full trust in Christ is one also marked by peace and contentment. John modeled that confidence in such a consistent and effortless way that he has left a strong and lasting legacy. Friends will be received from 6:00 p.m. to 8:00 p.m. Friday, February 25th at the William Snyder Funeral Home, 521 Main Street, Irwin, PA 15642. A funeral service will be held at 12:00pm on Saturday, February 26th at First United Methodist Church, Oak & Third Streets, Irwin, PA. Interment will follow in Penn Lincoln Memorial Park. In lieu of flowers, donations can be made in John Cooper’s name to Providence Home Columbia, South Carolina at www.providencehomecolumbia.org .

John Spindler Cooper, 87, passed away peacefully on February 15, 2022, surrounded by his family in Columbia, SC, formerly of Irwin. He was born July 31, 1934 in McKeesport, PA, a son of the late James and Dorothy Cooper and was preceded in death... View Obituary & Service Information

The family of John S. Cooper created this Life Tributes page to make it easy to share your memories.

Send flowers to the Cooper family.