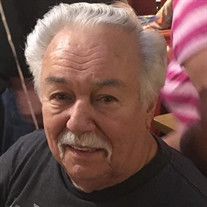 John “Benny” F. Benson, age 83, of North Versailles, passed away on Monday, May 17, 2021. He was born September 14, 1937 in Homestead, a son of the late John and Anna Benson. He was a long-time member of the Mary Mother of God Parish in East McKeesport (Formerly St. Robert Bellarmine). He was a Navy veteran that went on to have a long career as a truck driver before retiring. He was proud of his time spent as a volunteer fireman in at Green Valley, North Versailles #8 where he was a past president. He also served as a past president of the Allegheny and Pennsylvania Volunteer Fireman’s Associations. He was a big NASCAR fan, enjoyed riding his Harley Davidson Motorcycle with his wife and spent time at the American Legion in Dravosburg. In addition to his parents, he is preceded in death by his brother Joe Lengyel of West View and his nephew Jeff Benson of North Versailles.. He is survived by his wife of over 59 years Katherine Benson; children John R. Benson of Hampton, Virginia, James P. Benson of North Versailles, Dawn M. Fox of North Versailles, Joseph D. (Diane) Benson of North Versailles and Kelly A. Benson of Whitaker; grandchildren Dylan (Megan) Benson, Riley Benson, Justin Fox, Tyler Benson, Brittany Benson, Brian Fox, Bree Benson, Addison Benson and Chase Benson; great grandchildren Ryan and Amelia Fox; and brother James P. Benson of Somerset. Friends and family will be received from 2 to 4 and 6 to 8 p.m. Wednesday at the Forgie-Snyder Funeral Home, 1032 Broadway, East McKeesport, 412-823-8083. A Mass of Christian Burial will be celebrated at 10 a.m. Thursday at St. Robert Bellarmine Church in east McKeesport. Interment with military honors will follow at Penn Lincoln Memorial Park in North Huntingdon Twp. Memorial contributions can be made to either your local Volunteer Fire Department or a Veterans charity. For online condolences please visit www.snyderfuneralservices.com.

The family of John "Benny" F. Benson created this Life Tributes page to make it easy to share your memories.

Send flowers to the Benson family.