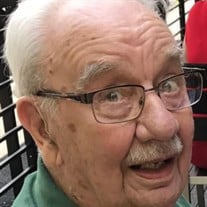 James D. Welsh, 90, of East McKeesport, passed away peacefully on Wednesday, August 12, 2020. He was born June 26, 1930 in East McKeesport, a son of the late B.F. “Hank” and Nell (Mackey) Welsh. He was a member of Linway United Presbyterian Church, North Versailles where he served as a Deacon and an Elder, also working many years with the Meals on Wheels program. Jim was an Army veteran that served during the Korean War, stationed in Manilla, Philippines, a retired machinist for U.S. Steel Research Center, Monroeville, a member of Hilltopers VFW Post 8430, and the American Legion, East McKeesport. He was an avid sports fan that loved the Steelers, Pirates, and Penguins. Jim loved to golf and bowl and once bowled a perfect 300 game in the U.S. Steel Bowling League. In addition to his parents he was preceded in death by his his former wife Mary (Heffernan) Welsh; a daughter Kathy Jean Welsh; and his siblings Bill Welsh, Betty Burnworth, Ruth Rothrauff, Frank Welsh, and Bob Welsh. He is survived by his children Jim (LuAnne) Welsh of Oakmont, and Kim Tyler of Oregon, grandchildren Zach (Nikki) Welsh and Corey (Holly) Perry; great grandchildren Ethan Welsh and Madelyn Perry; also nieces and nephews. Friends will be received from 9 - 11 A.M. Friday, September 4, 2020 in the Forgie-Snyder Funeral Home, 1032 Broadway, East McKeesport, 412-823-8083. Outdoor committal, military honors, and interment will follow in Penn Lincoln Memorial Park For online condolences please visit www.snyderfuneralservices.com.

The family of James D. Welsh created this Life Tributes page to make it easy to share your memories.

Send flowers to the Welsh family.