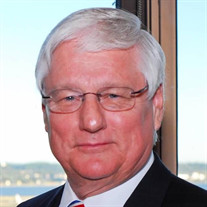 James J. “Jim” Ballough Jr., 66, of North Huntingdon, died Tuesday May 3, 2016 at home after a 7 ½ year battle with pancreatic cancer. Jim was a Vice President at Cavok, a division of Oliver Wyman Inc., Keller, TX, and had retired as the Director of Flight Standards Service for the Federal Aviation Administration (FAA) with twenty-seven years’ service. Jim was highly respected in the aviation industry for his knowledge, experience and leadership. He started his aviation career as a Certified FAA A & P Mechanic with Eastern Airlines. He then joined the FAA as Safety Inspector, and the FAA recognized his talents and promoted him to be the Principal Maintenance Inspector (PMI) of US Airways. His performance as the PMI at US Airways earned him a promotion to Manager of the Technical Branch in the FAA Eastern Region Office, located in NY. Within a short period of time he was promoted to Director of the Flight Standards Service, in Washington DC, until his retirement from public service. The Air Transport Association of America awarded him the prestigious “Nuts and Bolts“ award in recognition of his outstanding leadership in the Flight Standards Service. Jim earned a B.S. in Professional Aeronautics from Embry-Riddle Aeronautical University. He also earned an aviation maintenance technician degree from Pittsburgh Institute of Aeronautics. Jim was a member of the National Air Transportation Association (NATA) and the Air Charter Safety Foundation. Jim was a devoted Steelers fan, avid golfer, and model train enthusiast. Jim was also an Army veteran of the Vietnam Conflict. He was a member of the Immaculate Conception Church, Irwin. He is survived by his wife of 45 years Michele A. (Buzek) Ballough; his children, Lauren A. Ballough (Kennedy Mitchell) of North Salem, NY, and James J. (Juliette) Ballough III of North Huntingdon; siblings, Margaret (Doug) Estelle of Meadville, Susan (Greg) Pastor of McKeesport, and Michael (Amy) Ballough of Charlotte, NC; also nieces and nephews. He is preceded in death by his parents Betty J. Ballough and James J. Ballough, Sr. Friends will be received from 6 to 8 p.m. Saturday and 2 to 4 and 6 to 8 p.m. Sunday at the William Snyder Funeral Home Inc., 521 Main Street, Irwin, 724-863-1200. Parting prayers will be held at 9 a.m. Monday in the funeral home followed by a Mass of Christian Burial celebrated at 9:30 a.m. in the Church of the Immaculate Conception in Irwin. In lieu of flowers, remembrances can be made to the Pancreatic Cancer Action Network (www.pancan.org), 1500 Rosecrans Avenue, Suite 200, Manhattan Beach, CA 90266. For online condolences please visit www.snyderfuneralservices.com.

The family of James "Jim" J. Ballough, Jr. created this Life Tributes page to make it easy to share your memories.

Send flowers to the Ballough family.