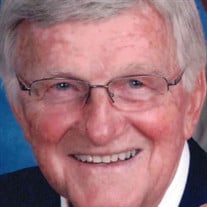 James E. Belak, 87, of North Huntingdon, died Sunday January 10, 2021, due to complications from the covid virus. He was born September 2, 1933 in Penn Township, the son of the late Charles and Mary (Belak) Valero. In addition to his parents he is also preceded in death by his beloved son Brett C. Belak. He was the founder of Belak Flowers which he started on November 1, 1960 in Irwin where he worked until his semi-retirement at the age of 65. He greeted everyone with a smile, kind word, and encouragement. In recent years he had an online business selling mosaics called Mosaics by Kaleb. He was loved by many and will be missed by everyone. Jim graduated from Penn-Joint High School, Class of 1951, where he played basketball and football. He also took a few business classes at Penn State University. He was a member of Holy Trinity Lutheran Church, Irwin, where he served on church council for many years. He was a longtime member and past president of the Norwin Rotary Club, a member of the Norwin Chamber of Commerce, and served on the board of directors of Union Cemetery. He was also a member of Shidle Lodge No. 601, F&M, Irwin and participated in the Bromas Club bowling and golf leagues. He was a member of the Norwin Art League, volunteered for Meals on Wheels, enjoyed playing in couple’s golf leagues, and had in recent years developed a love for trap shooting. He is survived by his loving wife of 58 years, Rochelle (Hudson) Belak; his son Eric Belak (Joyce Dean); daughter in law Jera Belak; and his grandchildren Jason, Sarah, Ethan, John, and Eric Belak Jr. Friends will be received from 2 to 4 and 6 to 8 p.m. Thursday at the William Snyder Funeral Home, 521 Main Street, Irwin. A funeral service will be held at 11 a.m. Friday in Holy Trinity Lutheran Church. Interment will follow in Union Cemetery, North Huntingdon. For online condolences please visit www.snyderfuneralservices.com.

James E. Belak, 87, of North Huntingdon, died Sunday January 10, 2021, due to complications from the covid virus. He was born September 2, 1933 in Penn Township, the son of the late Charles and Mary (Belak) Valero. In addition to his parents... View Obituary & Service Information

The family of James E. Belak created this Life Tributes page to make it easy to share your memories.

Send flowers to the Belak family.