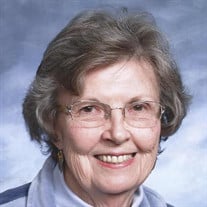 Jacqueline Weishorn, 83, of Latrobe, passed away Monday, September 17, 2018 at Excela Health Latrobe Hospital. Born April 25, 1935 in Pitcairn, she was a daughter of the late Herman David Weishorn and Mary Magdalene (Hammer) Weishorn. Jacqueline was a graduate of East McKeesport High School, Class of 1953. For many years, she was employed by the former TCI and Charter Cable Companies of Greensburg. She was an avid reader and enjoyed wildflowers, hiking and going to the movies. Family was very important to Jacqueline and she shared a special bond with her sisters and cherished her time with friends. In addition to her parents, she was preceded in death by a daughter, Mary Jo Kelly, and a sister, Geri Gogets. Jacqueline is survived by one daughter, Kathryn L. Kelly, of Latrobe, who was her devoted caregiver; two sons, Daniel D. Kelly, and his wife Jenny, of Littleton, CO, and Kevin L. Kelly, and his wife Ronda, of Portland, OR; three sisters, Jeanne Kisner of Irwin, Johanna Roberts of Bethel Park, and Kathryn Cassidy of Tustin, CA; six grandchildren, Jacob Ferlin, and his wife Erica, Jessie, Ian, Lauren, Audra, and Ryan Kelly; two great-grandchildren, Grayson and Eleanor Ferlin; and she is also survived by several nieces and nephews. Family and friends will be received from 2 to 3 PM on Saturday at the William Snyder Funeral Home, Inc., 521 Main Street, Irwin, where a blessing service will be held at 3 PM. Interment will be private. In lieu of flowers, the family suggests that memorial contributions be made to Clelian Heights School for Exceptional Children, 135 Clelian Heights Lane, Greensburg, PA 15601 or to the Westmoreland County Food Bank, 100 Devonshire Drive, Delmont, PA 15626. To sign online Guest Book, send condolences, or to view detailed obituary information, please visit www.snyderfuneralservices.com.

The family of Jacqueline Weishorn created this Life Tributes page to make it easy to share your memories.

Send flowers to the Weishorn family.