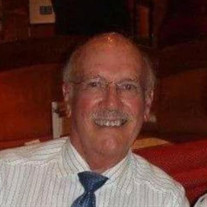 Jack Richard Sutter, age 91, of White Oak, formerly of North Versailles, passed away peacefully on Tuesday, August 11, 2020, following a short battle with cancer. Born in Elizabeth, he was the son of the late Stanley and Bertha Sutter. He graduated from McKeesport Vocational High School and served in the US Air Force during the Korean War. Following the war, he was employed for over 34 years at Westinghouse Research and Development Center in Churchill where he participated on the cutting edge of laser and fiber optics development. He was an accomplished artist and lover of music and was physically active and involved in many activities up to the end. He was especially proud of his work with his beloved church St. John’s Lutheran Church in North Versailles where he served as an adult church school teacher and leader, worship assistant, and choir member and with Meals-On-Wheels where he served for over 25 years. He was beloved by his family, friends and all who knew him. In addition to his parents, he is preceded in death by his wives Elynor Mae Sutter and Janet A. Sutter, brother Charles Sutter, and sister Delores Craighead. He is survived by his sister, Marleen Coughanour of Sewickley; his children Merideth (Craig) Staudenmaier and Laurie Bassler of Harrisburg, and Amy (Kevin) Kuzio of Phippsburg, Maine; step-children Doreen (John) Marquis of Fort Mill, South Carolina, Karen (Bill) Lew of Baldwin and Jeff Gebhart of Cannonsburg; 14 grandchildren; and 5 great-granddaughters. Due to the COVID pandemic, a memorial service will be scheduled at a later date. Private interment will be at Round Hill Cemetery in Elizabeth. Arrangements are being handled by the Forgie-Snyder Funeral Home, 1032 Broadway, East McKeesport, 412-823-8083. Memorial contributions can be made to St. John’s Lutheran Church, 715 Lincoln Way, North Versailles, PA 15137 or McKeesport Meal-On-Wheels, 1406 Cornell Street, McKeesport, PA 15132. For online condolences please visit www.snyderfuneralservices.com.

Jack Richard Sutter, age 91, of White Oak, formerly of North Versailles, passed away peacefully on Tuesday, August 11, 2020, following a short battle with cancer. Born in Elizabeth, he was the son of the late Stanley and Bertha Sutter. He graduated... View Obituary & Service Information

The family of Jack Richard Sutter created this Life Tributes page to make it easy to share your memories.

Send flowers to the Sutter family.