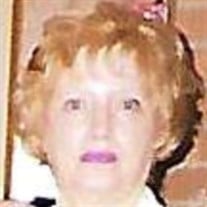 Gloria Lee Carter Johnston, 92, of East McKeesport, affectionately known as "Glo" passed away peacefully into the loving arms of our Lord, December 16, 2020. She was born September 28, 1928 in Reading, a daughter of the late Arthur and Laura Carter. She graduated from East McKeesport High School in 1946 and attended the Art Institute of Pittsburgh. She was a fashion illustrator for Jaison's Department Store. Her illustrations were published in the McKeesport Daily News. Glo enjoyed traveling, reading, shopping, her soaps, and Jeopardy. She was an active person and enjoyed being part of the planning committees of her high school reunions. Gloria married her husband of 54 years David R Johnston on August 20, 1948. She became a wife, homemaker, and mother of three. David passed away on April 21, 2002. For the last 10 ½ years she has resided with her loving and dedicated son and daughter-in-law, Jeffery C Johnston and Beth Ann Graziano. She is also missed by her beloved fury feline Whitey. Also surviving is her son David C. Johnston of Latrobe, her daughter Kathryn L. Peters of GA; granddaughters Sacha and Maia; great granddaughter Olive; and her sister Kathryn "Kay" McConnell of OH. She is predeceased by her sister Beverly Shaw. Many thanks and appreciation to Kane Regional of McKeesport, (especially Osa Robinson who was a beloved Angel to Gloria), Three Rivers Hospice, and Becky of Comfort Keepers. Friends will be received from 3 to 5 p.m. Saturday January 9, at the Forgie-Snyder Funeral Home, 1032 Broadway, East McKeesport, where a memorial service will follow at 5 p.m. In lieu of flowers contributions in Gloria's name can be made to Ma's Pantry or Meals on Wheels in North Versailles. For online condolences please visit www.snyderfuneralservices.com.

Gloria Lee Carter Johnston, 92, of East McKeesport, affectionately known as "Glo" passed away peacefully into the loving arms of our Lord, December 16, 2020. She was born September 28, 1928 in Reading, a daughter of the late Arthur and Laura... View Obituary & Service Information

The family of Gloria Lee Carter Johnston created this Life Tributes page to make it easy to share your memories.

Send flowers to the Johnston family.