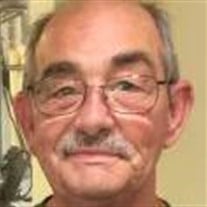 Gerald J. “Jerry” Robinson, age 69, passed away peacefully at home on Saturday, December 7, 2019. Jerry, also known as Chico, also known as Buddy, was born on October 11, 1950 to the late George and Violet (Donati) Robinson of Pitcairn. Jerry was a veteran of the US Navy serving in the Vietnam Conflict. He spent his career in the construction field as one of the finest plasterers in the area and was a member of the OPCMIA, Local 31. His work can be admired all around Pittsburgh, including Heinz Hall and Kennywood. He was a member of St. John’s Evangelical Lutheran Church, North Versailles. Jerry was infamous for many things. He loved being outdoors on his quad, fishing, hunting, and camping. He was known for his secret recipe grilled chicken and making homemade wine, prosciutto, sauerkraut and sausage. In his recent years, Jerry spent his time babysitting his grandchildren, whom he spoiled with whatever they wanted. They remember him for his love cowboy shows on TV, Ovaltine, and buying them happy meals. In addition to his parents he is preceded in death by his sister Daryl Hutter. He is survived by his wife Linda (Schriber) Robinson, his three children Carly Robinson (Lynnley DeBernardo), Jodi Procida (Will), and Casey Robinson (Ella) as well as three grandchildren Quinn, Lucy, and Elsie, and a sister Beverly DeFlippo. Friends and family will be received at William Snyder Funeral Home, 521 Main Street, Irwin, from 2 to 4 and 6 to 8 p.m. Tuesday. A funeral service will be held at a time to be announced Wednesday in St. John’s Evangelical Lutheran Church, 715 Lincoln Highway, North Versailles. In lieu of flowers, the family suggests contributions to St. Jude Children Hospital or the charity of your choice in Jerry’s name. For online condolences please visit www.snyderfuneralservices.com.

The family of Gerald "Jerry" J. Robinson created this Life Tributes page to make it easy to share your memories.

Send flowers to the Robinson family.