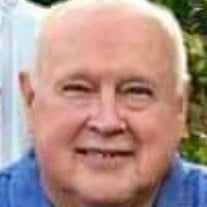 George E. Tobias, 76, of Irwin passed away Tuesday, December 1st, 2020, at UPMC Presbyterian, surrounded by his family, after a long battle of heart disease. George was born September 1, 1944, in Windber, a son of the late John and Susan (Claar) Tobias. He graduated from Windber Area High School, class of 1962 and from Clarion University in 1966 with a bachelor’s degree in secondary education (social studies.) He also received his Master’s degree in secondary education from Indiana University of Pennsylvania. He was a devoted teacher for 30 years at Hempfield Area School District and retired there in 1996. He was a coach for softball and football at Hempfield for many years. He was very involved in various sports at Hempfield. George loved to golf and especially the golf league with friends and retired teachers. He also loved to garden, watch football with his family, going out to eat with family, and loved playing cards with his friends on Wednesdays and their monthly get together for lunch and dinner. Anytime spent with his family was time well spent in his eyes. He never missed any of his grandchildren's sports games. He was a member of St. Edward Catholic Church, Herminie, the Irwin Moose, and was an avid hunter and fisherman. You would always catch George watching the Steeler, Penn State football games on television. George’s favorite activity was to go to the casino with his wife and neighbors. In addition to his parents he was preceded in death by his son, Wayne E. Tobias, his daughter, Kimberly A. (Tobias) Tomajko, his brother John Tobias, and sisters Dora DiGiacomo, Carol Strapple and his brothers in law Dominic DiGiacomo and Edward Marsh. He is survived by his loving wife of 53 years Shirley A. (Faust) Tobias, his three grandchildren, Zachary Tomajko of Greenburg, Brian Tomajko and his wife Kamryn of Perryopolis, and Melissa Tomajko and fiance Conner Devers of Greensburg. He is also survived by his brother Thomas Tobias (Susan), and sister Kathryn Marsh both of Warren OH and many other in-laws, nieces, nephews, cousins, and friends. George truly did leave a lasting impact on every person he met. He was one of a kind. He will forever be missed by his family and friends and no words can express how much we love him. Friends will be received from 2 to 4 and 6 to 8 p.m. Sunday at the William Snyder Funeral Home, 521 Main Street, Irwin, where a Blessing Service will be held Monday at 11 a.m. with Father Richard Ulam, officiating. Those wishing may contribute to Western Pennsylvania Kidney Kamp thru the Dialysis Clinic, Inc. @ dciinc.org. For online condolences please visit ww.snyderfuneralservices.com.

George E. Tobias, 76, of Irwin passed away Tuesday, December 1st, 2020, at UPMC Presbyterian, surrounded by his family, after a long battle of heart disease. George was born September 1, 1944, in Windber, a son of the late John and Susan (Claar)... View Obituary & Service Information

The family of George E. Tobias created this Life Tributes page to make it easy to share your memories.

Send flowers to the Tobias family.