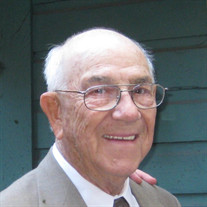 George “Bud” R. McIndoe Jr., age 97, of Irwin, passed away Sunday, October 11, 2020. He was born August 23, 1923 in McKeesport, a son of the late George Sr. and Catherine McIndoe. He was a World War II veteran fighter pilot in the Army Air Corp and flew the P47 Thunderbolt airplane in 13 sorties over Germany as part of the 371st Fighter Group, 405 Squadron. After returning from the war, he worked his entire career for Bettis Atomic Nuclear Power Plant where he was on the forefront of Ultrasonic testing of hairline cracks in steam generation tubes in nuclear submarines. Because of his work, he was requested to preform ultrasonic inspections aboard the Nautilus submarine and the USS Enterprise aircraft carrier. Before retiring, he received the Engineering Achievement Award for developing a unique ultrasonic testing device. He built his home on the family homestead in 1955 on Mosside Blvd in Monroeville next door to his mother "Teenie" McIndoe and his sister Jean Bendorf. Bud and Audrey moved from Monroeville and lived in North Huntingdon from 1976. He attended Linway Presbyterian Church in North Versailles, and was a longtime member of Shidle Lodge No. 601 F. & A. M., Irwin and enjoyed golfing in the Bromas League. He was a past member of the Willowbrook Country Club and the Madison Club and was an avid table tennis player, bowler and enjoyed watching tennis. In addition to his parents, he is preceded in death by his first wife of over 51 years Audrey Y. Aston McIndoe and his second wife Heloise Lehner McIndoe; sisters Elizabeth (Nathan) Myre and Jean (Alfred) Bendorf; and his favorite dog Muffin. He is survived by his children George (Julie) McIndoe III of Mt. Lebanon and Margaret “Peggy” (Ron) Lewis of St. Mary’s County, Maryland; grandchildren Bryan (Laurisa) McIndoe and Megan (Andrew) Tighe; and great grandchildren Cora Grace McIndoe and A.J. Tighe. Friends and family will be received on Saturday from 11 a.m. till the time of the funeral service at 1 p.m. with Rev. Eric Dennis officiating at the William Snyder Funeral Home, 521 Main Street, Irwin, 724-863-1200. Interment with military honors will follow at Union Cemetery, North Huntingdon. A Masonic funeral service will be held at 12:30 p.m. Saturday in the funeral home. In Lieu of flowers, memorial contributions can be made to the Project K-9 Hero at www.project k9hero.org. For online condolences please visit www.snyderfuneralservices.com.

The family of George "Bud" R. McIndoe Jr. created this Life Tributes page to make it easy to share your memories.

Send flowers to the McIndoe family.