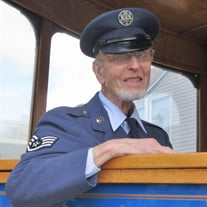 Frank G. Helman, of Boothbay Harbor, Maine, died at home Thursday, June 2, with his beloved wife of 32 years, Martha (Peak) Helman, at his side. He was 92 years old. Born and raised in Irwin, Pennsylvania, he was the son of Frank W. and Esther (Gootee) Helman. An early memory involved watching the construction crew at work on the western terminus of the Pennsylvania Turnpike. Frank’s father was co-owner of Irwin’s print shop and editor of the “Republican Standard,” the town’s weekly newspaper. Frank fondly remembered his first job there folding newspapers, and by high school he had transitioned to running the linotype machine. Frank served as editor of both his high school and college newspapers. He graduated from Irwin High School in 1947. He enrolled at Muskingum College (now Muskingum University), but left during his junior year to enlist in the Air Force, a decision that led him to a life-long love of languages and political science. After successfully completing an intensive Russian language course, in 1952 he was assigned to West Berlin, where his duty was to monitor and transcribe radio traffic of the Soviet Air Force. While in Berlin, he met and married Dagmar Nitsch, who was the manager of the American newsstand at Tempelhof Air Base. After his discharge, he used the GI Bill to complete his undergraduate degree at the University of Pittsburgh, and then was awarded a scholarship to study at the Free University in Berlin. He joined the Foreign Service in 1960, and was posted to the American Embassy in Oslo. He found the work satisfying, but not the prospect of moving his growing family every few years to a different nation. So he resigned to take a position with the New York subsidiary of a German manufacturing firm. Over the next 15 years he rose to become corporate secretary and treasurer, only to have his position disappear in a corporate reorganization in 1979. At the age of 50, Frank made another substantive career change: He enrolled at New York University School of Law and eventually developed a trusts and estates practice at Walter Conston & Schurtman, a law firm with substantial German clientele. He was respected for his command of inheritance law and published on both sides of the Atlantic. In later years, amid other reparations work, he worked successfully to locate and return stolen Nazi art. In 1990, he and Martha were married. One year later, the couple built what they thought was a vacation cottage in Maine. By the time it was finished, however, they had become better acquainted with the town of Boothbay Harbor, and it was clear that this was be their future retirement home. In 2003, the senior partner of Frank’s law firm died, leaving Frank responsible for his considerable fortune and charitable family foundation. Instead of trying to earn money, Frank now had to learn to give it away. Frank always said that, if you do it right, it’s just as much work, but a lot more fun. Under his leadership, the Otto and Fran Walter Foundation educated children in the world’s poorest countries, fed the hungry, cared for Holocaust survivors, helped protect girls in danger of sex trafficking and women from domestic violence, and brought the arts to underprivileged American youth. The Walter Foundation made further history in 2021 by inking an agreement with The Rotary Foundation to fully fund a Rotary Peace Center in the Middle East/North Africa Region. In recognition of a lifetime of humanitarian work – from interviewing displaced persons who washed up in Berlin during the Cold War to his leadership of the Otto and Fran Walter Foundation -- in 2009 Muskingum College conferred upon him the honorary degree of Doctor of Humane Letters. Frank was an active member of Maine’s American Legion Post 36, the Congregational Church of Boothbay Harbor, and the Rotary Club of Boothbay Harbor, which named him “Rotarian of the Year” in 2006. Over the years, he was instrumental in rewriting the bylaws of these organizations and countless others. In recognition of his obligation as last of his generation, Frank spent his final days compiling genealogical information which he asked to be distributed to his immediate family and his surviving cousins. Frank is deeply mourned by his wife, Marty, and sons Mark, of Bethel, Vermont; Lars, of Lockhart, Texas; and Chris, of Northampton, Massachusetts. He is also mourned by future daughter-in-law Rochelle St. Laurent. Frank leaves an office of file folders filled with papers on a wide variety of topics that sparked his curiosity; a well-thumbed copy of Robert’s Rules of Order, and a lifetime of New York Times crossword puzzles, all completed in red ink. A memorial service will be held in Boothbay Harbor this month. Interment at Brush Creek Cemetery will take place in September. Contributions in lieu of flowers can be made to Rotary’s campaign to eradicate polio worldwide (go to www.rotary.org and click on DONATE).

Frank G. Helman, of Boothbay Harbor, Maine, died at home Thursday, June 2, with his beloved wife of 32 years, Martha (Peak) Helman, at his side. He was 92 years old. Born and raised in Irwin, Pennsylvania, he was the son of Frank W. and Esther... View Obituary & Service Information

The family of Frank G. Helman created this Life Tributes page to make it easy to share your memories.

Send flowers to the Helman family.