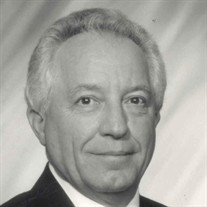 Dominic G. Acalotto Jr., 85, of North Huntingdon, died Sunday March 6, 2022 at home. He was born August 15, 1936 in Irwin, a son of the late Dominic G. Sr. and Aurora (Marsiglio) Acalotto. Dom was retired from the U.S. Air Force and also the U.S. Postal Service. Following retirement he worked as a greeter and assistant for William Snyder Funeral Home in Irwin, a job he loved and was well suited for. He was a member of Immaculate Conception Church, Irwin. Dom was a past president and longtime active member of the Irwin Lions Club and also served as District Governor for District 14-E. He was past president and board member of the Westmoreland County Blind Association and a member of the American Legion Post 344 and VFW Post 8240 both of Jeannette. In addition to his parents he is preceded in death by his daughter, Robin Brooks, and brothers Donald G. Acalotto and Robert Joseph Acalotto who is missing in action from the Vietnam Conflict. He is survived by his wife Anita M. (Hrapchak) Acalotto; his daughter Cynthia (Joe) Eason of Navarre, FL: son-in-law Patrick Brooks of Conway, AR; grandchildren; great grandchildren; siblings, Ettore (Felicia) Acalotto of North Huntingdon and Loretta (Ted) Leriotis of Monroeville; sisters-in-law, Isabelle Acalotto and Elaine (the late Bob) Gutwald both of North Huntingdon and Paula (Jim) Folda of Brookfield, WI: also numerous nieces and nephews, including Rob (Karrie) Gutwald of Harrison City and Debbie (Steve) Hlavach of North Huntingdon; and great-nephews Joey Hlavach and Charlie Gutwald. Friends will be received from 2 to 4 and 6 to 8 p.m. Wednesday at the William Snyder Funeral Home, 521 Main Street, Irwin, 724-863-1200. A Mass of Christian Burial will be celebrated at 10:30 a.m. Thursday at Immaculate Conception Church. Interment with veteran honors will follow in Union Cemetery. The Irwin Lions Club will hold services at 7 p.m. Wednesday in the funeral home. The family would like to thank his caregiver Shirl Staubach for all the loving compassionate care and also Three Rivers Hospice. For online condolences please visit www.snyderfuneralservices.com.

Dominic G. Acalotto Jr., 85, of North Huntingdon, died Sunday March 6, 2022 at home. He was born August 15, 1936 in Irwin, a son of the late Dominic G. Sr. and Aurora (Marsiglio) Acalotto. Dom was retired from the U.S. Air Force and also the... View Obituary & Service Information

The family of Dominic G. Acalotto Jr. created this Life Tributes page to make it easy to share your memories.

Send flowers to the Acalotto family.