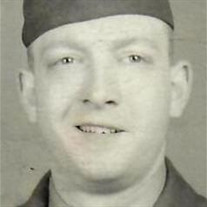 Dennis M. O’Brien, 84, of North Versailles, died at home Saturday July 8, 2017. He was born August 14, 1932 in North Braddock, a son of the late Michael E. and Elizabeth M. (Yussen) O’Brien. Dennis served in the U.S. Army, then did his apprenticeship at Westinghouse Electric and retired as vice president of manufacturing and engineering, tool and die maker, with Precise Metals & Plastics, North Versailles. He also owned and operated Mold Polishing Inc. for ten years. Dennis enjoyed coaching when his children played sports and also enjoyed stained glass, gardening, and landscaping. He was an avid golfer and a member of S & A golf league. He is survived by his wife of over 56 years, Sue Ann (Gobbel) O’Brien; his children Patrick D. O’Brien of Delaware, OH, Timothy S. (Patti A.) O’Brien of Peachtree City, GA, and Kelly S. O’Brien of North Versailles; his grandchildren Shawn P. Michael P. (Tia), Casey J. ,Shane P., and Elizabeth A. O’Brien; sisters Patricia E. Davis of Verona and Noreen M. (Jack) Watkins of Upper Saint Clair; also many nieces and nephews. Friends will be received from 6 to 8 p.m. Monday and 2 to 4 and 6 to 8 p.m. Tuesday at the Forgie-Snyder Funeral Home, 1032 Broadway, East McKeesport, 412-823-8083, where a funeral service will be held at 11 a.m. Wednesday. Interment will follow in Coulter Cemetery. In lieu of flowers a contribution can be made to Alzheimer’s Association. For online condolences please visit www.snyderfuneralservices.com.

The family of Dennis M. O'Brien created this Life Tributes page to make it easy to share your memories.

Send flowers to the O'Brien family.