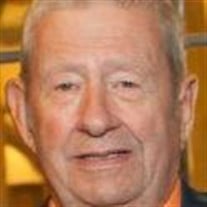 Darrell R. “Bob” Hubert Sr., 78, of Irwin, passed away Thursday, June 6, 2019 at home surrounded by his family. He was born November 10, 1940 in Philipsburg a son of the late William L. and Anna E. (Campbell) Hubert Jr. He was a member of the First United Methodist Church, Irwin and was a retired machinist for the Elliott Company, Jeannette, and he was also a member of Elliott Retirees. Bob was very active in his church he was a member of the dart ball league, volunteered for the food pantry, and was a member of United Methodist Men. He also was a proud U.S. Navy veteran and was a member of American Legion Post 359, Irwin. In addition to his parents Bob is preceded in death by a son in law Richard J. Simms, and his brothers Donald C. Hubert, Gerald R. Hubert, and W.L. Hubert III. He is survived by his wife of 58 years Alice J. (Blough) Hubert; children Darrell (Deena) Hubert Jr. of Bellefonte, Anita Simms of Irwin, and Sonya (Mark) Newmeyer of Westmoreland City; grandchildren Nikolas (Ashley) Hubert, Christopher (Amber) Hubert, Natalie (Mason) Hubert, Jesse (Heather) Simms, Alahna (Kodie) Simms, Joshua (Sarah) Newmeyer, and Lilliana (Jesse) Painter; great grandchildren Xavier and Tristan; also nieces and nephews. Friends will be received from 1 to 4 and 6 to 8 P.M. Sunday , at the William Snyder Funeral Home Inc., 521 Main Street, Irwin, 724-863-1200. A funeral service will be held at Noon Monday in the First United Methodist Church, 310 Oak Street, Irwin, PA 15642. Memorial contributions may be made to the church or to the American Cancer Society,250 Williams Street NW Atlanta, GA 30303.

The family of Darrell R. "Bob" Hubert Sr. created this Life Tributes page to make it easy to share your memories.

Send flowers to the Hubert family.