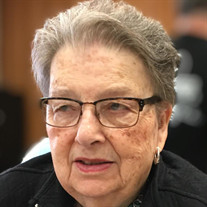 Clarissa Hazel (Henry) Caldwell, 87, of Irwin, formerly of Manor, passed away peacefully, Thursday, April 02, 2020, at St. Anne Home, Greensburg. She was born September 15, 1932, in Strawpump. She was preceded in death by her parents Clymer... View Obituary & Service Information

The family of Clarissa Hazel (Henry) Caldwell created this Life Tributes page to make it easy to share your memories.

Send flowers to the Caldwell family.