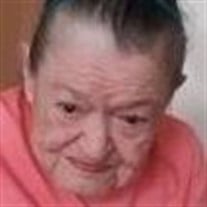 Charlotte Rae (Whitaker) Evans, 89, of Derry, formerly of Trafford, passed peacefully Friday August 10, 2018, at UPMC Presbyterian Hospital, Pittsburgh. She was born May 16, 1929 in Wall, a daughter of the late Charles Roy and Edith Mae (Miller) Whitaker and was also preceded in death by her husband Joseph F. Evans. Charlotte was a former cook for LaDonne Restaurant, North Huntingdon and was a member of Bible Baptist Church, Latrobe, the Theological Society of East McKeesport, and was a longtime volunteer for at the Grapeville VFD Gun Bash. She was a former active Girl Scout Leader while living in Illinois. She is survived by her children Faye D. Villa-James and her husband Ken of Cavittsville and Charles S. Evans and his wife Sandra Niehl of Turtle Creek; her grandchildren Kenneth (Vickie) James of Latrobe, Bethany A. James of Avalon David K. (Ashley) James of Greensburg Darlene F. (Chris) Fiasco of Monroeville, Alan Kunkle of Turtle Creek, and Anna (Aaron) Gabor also of Turtle Creek; her great grandchildren Michael C. and Matthew J. James of Latrobe, Autumn Gabor of Pitcairn Robert Kunkle of Washington state, Andrew Kunkle of New Kensington, Tyler Gabor of Pitcairn, and Brandon and Delana Gabor of Turtle Creek; and has been blessed with three great great grandchildren living in Washington state; siblings Robert A. (Patsy Joan) Whitaker Sr. of Valparaiso, IN and Edith M. Pedder of Herminie; also nieces Michele Whitaker and Edith Mae (Daniel) Ruggiero III and nephews Robert A. Whitaker Jr and Ray Alan (Jessica) Pedder; also great nieces and nephews. Friends will be received from 2 to 4 and 6 to 8 p.m. Tuesday at the William Snyder Funeral Home, 521 Main Street, Irwin, 724-863-1200, where a funeral service will be held at 11 a.m. Wednesday with Rev. Matt Schwender, officiating. Interment will be in Riverview Memorial Park, Penn Hills. In lieu of flowers a contribution can be made to Bible Baptist Church, 232 PA-217, Latrobe PA 15650. The family would like to thank the doctors and nurses at UPMC Presbyterian Hospital for all the outstanding care and compassion. For online condolences please visit snyderfuneralservices.com.

The family of Charlotte Rae Whitaker Evans created this Life Tributes page to make it easy to share your memories.

Send flowers to the Evans family.